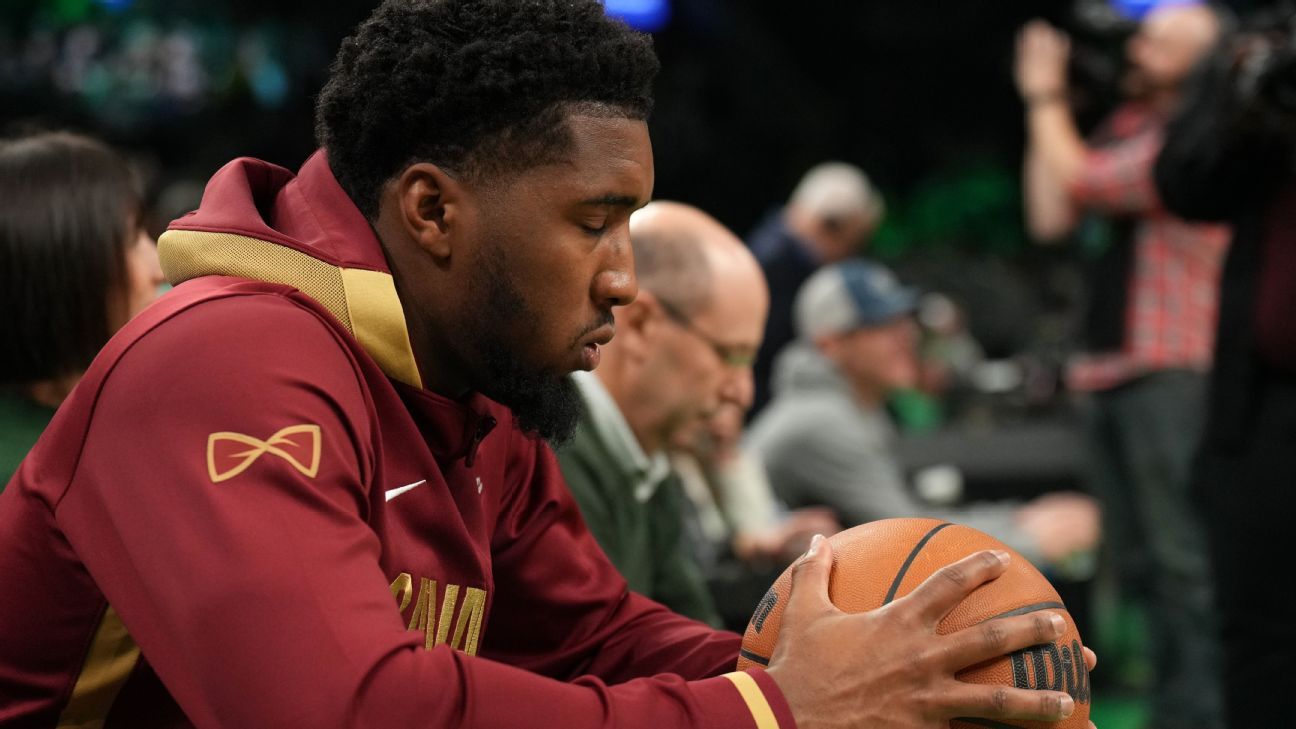 He spoke about the excitement for the season before turning serious and telling them about his oldest son, Nick Gilbert. NBA fans might remember Nick from the 2011 draft lottery, when he was the team’s on-stage representative and good luck charm. When the Cavs won the lottery that night, getting the right to draft Kyrie Irving No. 1 overall, the 14-year-old Nick declared “what’s not to like?”

Nick has neurofibromatosis, a genetic disorder that causes tumors to grow on nerves. For Nick, they’ve always grown in his brain. He has fought them throughout his 26 years and the battle has been daunting.

Dan, who has been in a wheelchair since suffering a stroke in 2019, told the Cavs players Nick needed three different brain surgeries in the past two months.

“He’s a fighter,” Dan said, which was shown on the team’s YouTube series “The Road Back.”

The team has dedicated the 2022-23 season to Nick and has been wearing a bowtie decal on their warm-ups, a nod to Nick’s trademark neckwear. The bowtie he wore at the 2011 lottery, the Cavs believe, was the reason they won the lottery again in 2013 and 2014 and jumped up to draft No. 3 in 2021 when they landed young star Evan Mobley. It was present at all of them, even when he wasn’t able.

Uniting around Nick is another bond for this Cavs team, which has slowly and deliberately been building an admirable team-first culture over the past several years that has been core to their 8-2 start.

It’s not a new concept, of course, but wanting it and actually selling that culture are very different realities. Coach J.B. Bickerstaff has sold it to his team, and it’s maybe best personified by an honor after victories that he designed to be a unifying force.

Midway through last season, Bickerstaff unveiled the “junkyard dog award,” given out to the player who was the scrappiest and hungriest performer in the win. It came complete with a purposefully ridiculous oversize golden chain, ripe for news conference wear and social media postings.

This also isn’t a new idea, but that’s much less important than buying into it. Earning that award has become a big deal in the Cavs’ locker room and, therefore, a competition on the floor during games. It goes for players who dive on the floor, take a vital charge or secure a big rebound.

Sunday night after a road win against the Los Angeles Lakers, Bickerstaff was ready to announce the honor and reached into the award’s traveling case only to find it empty. Which is when Kevin Love, now in his ninth season with the team, roared forth and revealed the players had flipped the tables and were giving the chain to their coach after an emotional halftime speech had fired up the Cavs’ defense. Bickerstaff had to blink away tears.

This all might sound a tad hokey for grown multimillionaires. But the connections are present in more tangible ways, too.

When Donovan Mitchell arrived over the summer following a blockbuster trade, he’d done his homework on how the Cavs operate internally. Perhaps sensitive to the concept he had issues with former Utah Jazz teammates, Mitchell came in with a team-first attitude that immediately impressed teammates, team sources said.

Cavs players, coaches and front office members noticed Mitchell showed no ego from preseason workouts right through the start of the season and multiple team members said they believed it helped him fit in. When All-Star guard Darius Garland went down in the first game with an eye injury, Mitchell’s move into a more pronounced leadership role was seamless.

Mitchell has been one of the Eastern Conference’s best players in the first month of the season, averaging 31.4 points and shooting 49.2%, both of which would be career highs.

The team’s togetherness shows in its collective defense, ranked second in the league, and how it has pieced together a great start despite some injuries. The core four of Mitchell, Garland, Mobley and Jarrett Allen had played a combined 28 minutes together over the first eight games because of various injury issues.

It’s all set up for an unexpected big game on Friday, when the Cavs visit their old adversary, the Golden State Warriors. It’s the first time in the five seasons since LeBron James left Cleveland that the game has had real meaning. It’s also been 25 seasons since the Cavs made the playoffs on a team without him, a streak this team looks like it might finally break.

Speaking of the Warriors, here’s NBA reporter Tim Bontemps on a developing issue for the defending champs:

Fountain of youth both fruitful, troublesome for Warriors

Golden State entering Monday’s game against the Sacramento Kings with a 4-7 record is shocking. The fact the Warriors were 4-7 when their starting five of Stephen Curry, Klay Thompson, Andrew Wiggins, Draymond Green and Kevon Looney had outscored opponents by 26.2 points per 100 possessions is downright unbelievable.

Why is Golden State struggling? It is getting run off the court when the youngsters enter the game.

Over the summer, the Warriors opted to not re-sign veteran bench players Otto Porter Jr., Gary Payton II and Nemanja Bjelica, all of whom played minutes in the 2022 NBA Finals. In doing so, the Warriors sent a clear message: the ongoing blending of the team’s veteran core and its young talent (namely Jordan Poole, James Wiseman, Jonathan Kuminga and Moses Moody) would take yet another step forward.

Poole, the rising star who Golden State lavished a $140 million extension on last month is minus-97 on the season, ranking him 447th out of 448 players. Kuminga is minus-59, 432nd in the league. Wiseman, who didn’t play Monday, is minus-69 in just 137 minutes.

What’s especially troubling for Golden State is, outside of reserve guard Donte DiVincenzo missing time with a hamstring injury in his left leg, the Warriors have been relatively healthy to start the season.

In other words: There’s no cavalry riding in to save the defending champs.

Where can Golden State go from here? In the short term, the right approach might be to do nothing. Wiseman, in particular, needs to play — he has barely gotten more than 1,000 combined minutes of NCAA and NBA gametime since the start of his freshman season at Memphis.

But can Golden State afford to give its youngsters on-the-job training while competing for a championship? Warriors coach Steve Kerr said last week that there will be changes to his rotation, but after previewing those tweaks during Saturday’s loss to the New Orleans Pelicans, it’s unclear what Kerr’s final product will become.

That leaves one other possibility: the trade market.

As of now, it’s hard to see the Warriors making such a pivot away from their young players. There has been too much time, money and sweat invested in them.

But the NBA is, in the end, a bottom-line business. And if the second unit continues to struggle while the starters shine, there could be difficult decisions to make.

Checking in on the first-place(!) Utah Jazz is NBA reporter Tim MacMahon:

Mike Conley will have none of this Jazz tank talk

As a wise meme once asked: “What’s going on in Utah?”

The short answer is much more winning than anticipated for a franchise that made a strong, sudden shift to rebuilding this summer.

“If they’re going to lose, they’ve got to get rid of me, too,” Conley, the only Utah starter from last season who wasn’t traded during this past offseason, told ESPN.

Conley cracked a big smile as he made that statement, but there’s some truth being told in jest. The Jazz veterans understand Danny Ainge and the front office are focused on building for the future after a Thunder-like haul of draft capital headlined the trade returns for former franchise cornerstones Rudy Gobert and Donovan Mitchell.

But there is a belief within the Jazz locker room that they’re good enough to win now — and a 9-3 start has provided convincing evidence that they’re right. Those players — a combination of leftovers from last season’s roster and recent trade arrivals — delight in proving doubters wrong who predicted Utah would have the best lottery odds to land French phenom Victor Wembanyama.

Conley, who is a few months older than 34-year-old rookie head coach Will Hardy, describes the Jazz’s vibe as “loose, fun and really chippy.” It’s a stark contrast to last season, when the Jazz had chemistry problems and the pressure of high expectations.

The Jazz lack starpower — although Mitchell trade piece Lauri Markkanen (21.8 points, 9.4 rebounds) and Utah leftover Jordan Clarkson (17.9 points, 5.3 assists) are thriving in larger roles, putting up the best numbers of their careers. Opponents and scouts rave about how hard and selflessly this mishmash roster plays for Hardy.

“It’s not the same team at all,” Conley says. “We’ve got something about us that’s just gritty and mean and carefree at the same time.”

On the Nets, I’m speaking, err, typing from experience

Desperation: The most lethal word in the front-office vocabulary.

I have plenty of experience with that word from my time working in the Brooklyn Nets front office.

The examples are endless:

But how can you walk away from a player you mortgaged part of the future to acquire? (We don’t need to go into more detail about the Boston Celtics trade. That turned into a disaster that set the organization back years — all out of desperation.)

Kevin Durant reflects on a tumultuous week for the Nets off the court, and says the players are finding solace by playing basketball.

So why play the game of revisionist history?

Because eight years ago, we as an organization (and I played a large role) had the opportunity to cut our losses. Instead, we passed on trades for Deron Williams, Joe Johnson and Brook Lopez. Instead of taking a big-picture approach with an eye toward the future, we held on for dear life to the trades of the past. Veteran Lionel Hollins was hired as coach. The thinking? A veteran tough-minded coach was needed for the current roster. Hollins did not make it through two seasons.

All of that leads us to advice for the current-day Nets: Don’t make the same mistakes.

If the feeling is that Irving is not part of the future, don’t be afraid to send him home, this time permanently.

If hiring Ime Udoka is more of a “Hail Mary” attempt to salvage the season, then wait until the offseason and conduct a more thorough search.

If the right trade package materializes for Kevin Durant, do not let the ghosts of past trades get in the way.

Yes, it is easy for me to sit behind a keyboard and a microphone.

I have nothing invested in the Nets, unlike the current front office that has invested everything.

But just remember this: The strongest front offices operate without blinders on during the season.