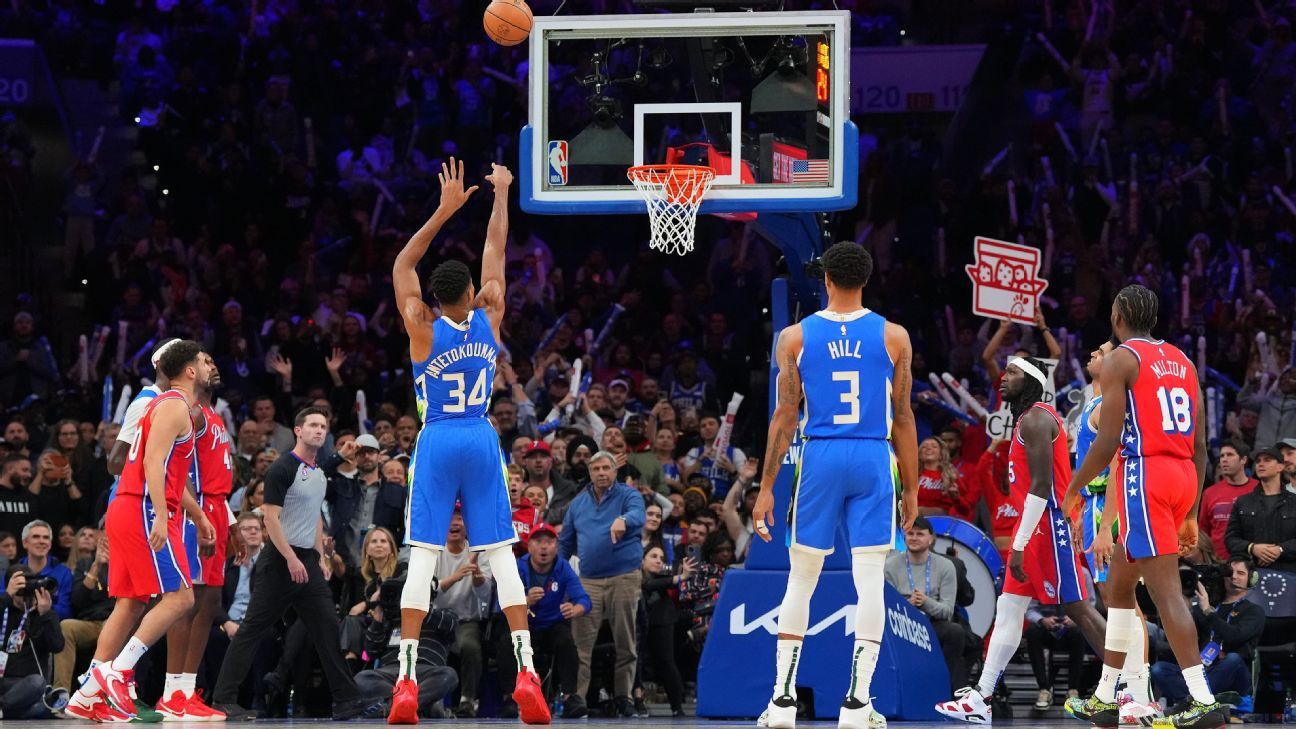 PHILADELPHIA — Following Milwaukee’s 110-102 loss to Philadelphia at Wells Fargo Center on Friday night, a strange scene unfolded between Bucks superstar Giannis Antetokounmpo, 76ers reserve center Montrezl Harrell and a ladder, culminating with Antetokounmpo pushing a 12-foot ladder out of his way and having it skid a few feet before falling over on its side.

“I’ve never tried to disrespect anyone in any way, shape or form,” Antetokounmpo said once he eventually spoke, more than an hour after the game ended. “I feel like today is just an unfortunate event that took place.”

What set all of these events in motion was a second straight dreadful game at the free throw line for Antetokounmpo, who went 4-for-15 from the charity stripe on Friday. This came after a 4-for-11 night at the line in Wednesday’s victory over the Cleveland Cavaliers.

So, after going back to the locker room following Friday night’s game, Antetokounmpo came back out to the court to practice some free throws.

It was at that point, however, that things took a very odd turn.

After Antetokounmpo made seven free throws in a row — part of his routine of making 10 in a row every time he steps onto the court — and had shot his eighth, Harrell took the ball away and wouldn’t give it back. He apparently was upset that Antetokounmpo was preventing him from getting in his own work ahead of Philadelphia playing the second half of a back-to-back against the Minnesota Timberwolves on Saturday night.

“I respect every player,” Antetokounmpo said. “I know some players don’t play now, they want to get some extra work, want to work on their skills and stuff, and I said, obviously we can shoot together. They said, they told me no, this is their court, I should leave. I was like, I have three more free throws, I was at seven, I want to try to make 10 in a row. I shot my eighth one. Came and took the ball away from me and I was very surprised. I feel like it’s very unprofessional. I would never take the ball away from a professional athlete when he’s trying to do his job.”

Thanasis Antetokounmpo then went and tried to speak to Harrell at the other end of the court, leading to another discussion and Harrell leaving with the ball. By the time reporters were aware of what had happened, Harrell had left the locker room. The 76ers organization also declined to offer comment about what happened.

Harrell later tweeted his own explanation of what happened.

“Aye make sure you get the complete story,” Harrell wrote in his tweet. “I ask the man can he get off the court so I can workout they had to change the court over he ignore me so hey that’s what you get! Respect is respect! GOODNIGHT!”

Giannis Antetokounmpo said he then went and got two more balls from Philadelphia’s locker room and came back out to the court, hoping to finish his routine. By that time, however, arena workers had put a large ladder up in front of the basket.

Antetokounmpo then went on to finish his routine and went back to Milwaukee’s locker room, where he was visibly upset about what had happened. He eventually talked to reporters a while later.

“I don’t know if I should apologize because I don’t feel like I did anything wrong, except the ladder just fell. I feel like it’s my right for me to work on my skills after a horrible night at the free throw line. I think anybody in my position that had a night like me would go out and work on his free throws. And if they didn’t, they don’t really care about their game.”

“I know what happened. I think there’s cameras all over this court. We can show the whole incident from people coming and getting the ball, people getting in my face. I don’t want to get into all those things.

“I don’t know if I should apologize because I don’t feel like I did anything wrong, except the ladder just fell. I feel like it’s my right for me to work on my skills after a horrible night at the free throw line. I think anybody in my position that had a night like me would go out and work on his free throws.

“And if they didn’t, they don’t really care about their game.”

Antetokounmpo also said that he believes his reputation precedes him and that he wouldn’t disrespect anyone in the league — nor, he said, was he trying to do so here.

“At the end of the day I think everybody knows my character,” he said. “I think the people that know my character know I never try to disrespect anybody within the NBA, within my coaching staff, within the opposing team. I respect with the best words about any player whenever I’ve been asked. Or I’ve never disrespected an opponent coach or a coaching staff. Or whenever I shoot and finish my routine, from my rookie year until now, I always shake every ball boys hand and make sure I thank them for the work I do because I know it’s hard to do their job chasing balls over and over and over again and make sure they’re OK. I do it for my ball boys and ball girls in Milwaukee. They help us when we shoot and I try to do it on the road, too. I’ve been known for this.”

When asked about the thing that started all of this — his poor free throw shooting the past two games and what was causing it — Antetokounmpo had a simple answer.

“I’m just not making them,” he said with a shrug. “Simple as that. I don’t think there’s no issue. The ball is not going in.”