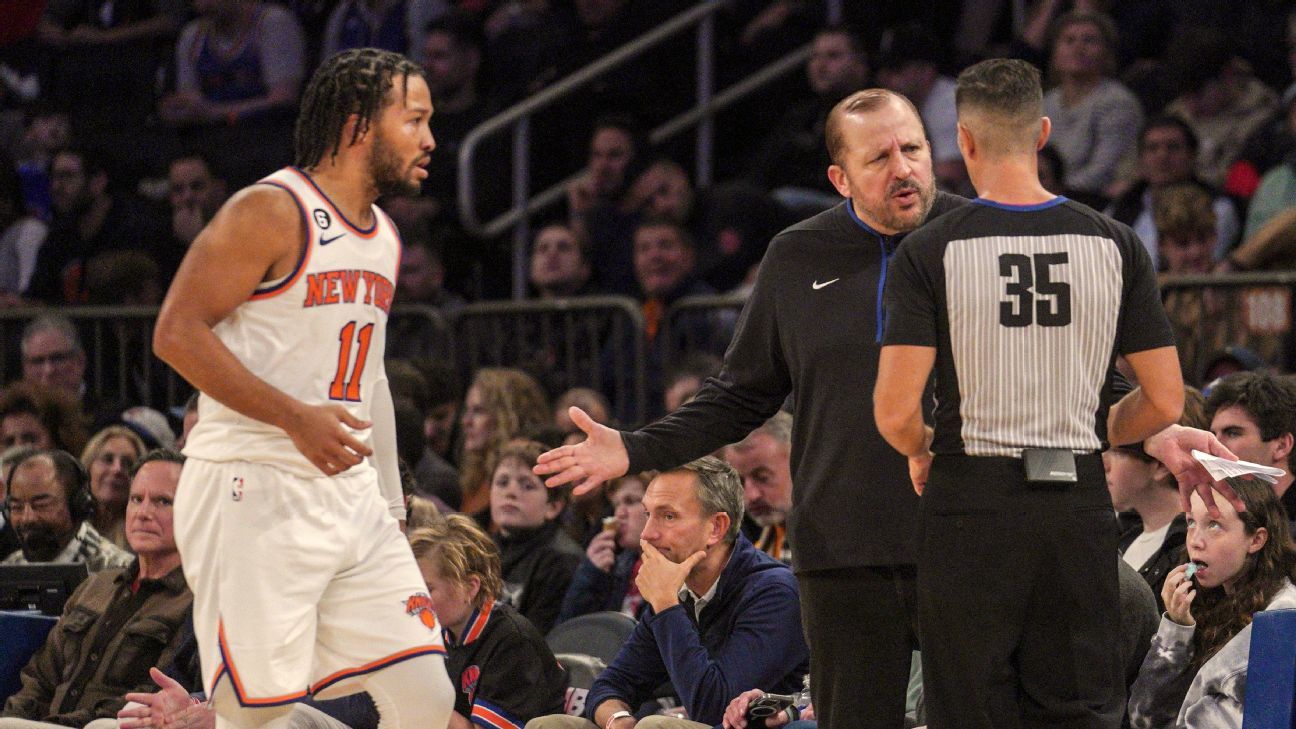 NEW YORK — Before the New York Knicks hosted the Dallas Mavericks on Saturday afternoon, Knicks coach Tom Thibodeau was asked about the NBA’s emphasis on enforcing traveling this season.

Over the ensuing 36 hours, the Knicks were hit with six violations in a blowout loss to the Mavericks before committing another eight — the most called on any team in a single game since 2010, according to Elias Sports Bureau research — during Sunday’s 91-82 victory against the Cleveland Cavaliers.

But it was a traveling call Thibodeau believed wasn’t called on Cavs guard Darius Garland that landed the coach a technical foul late in the fourth quarter.

“Obviously there’s an emphasis on it by the league,” Thibodeau said postgame. “I think [the enforcement] is good, for the most part. But I think you have to be consistent in the way in which you call it.

“If it’s tight for one team, it’s got to be tight for the other team.”

Neither side was happy with the way Sunday’s game was called. Cleveland coach J.B. Bickerstaff echoed his New York counterpart after the Cavs were called for five travels.

“To be honest with you, every game could be called like this,” Bickerstaff said after holding back a smile. “But it’s not. So when it is, it makes it difficult to figure out what exactly we’re doing and how we’re going to do it.”

Knicks forward Julius Randle, meanwhile, said he had never experienced such a game throughout his nine-year NBA career.

While Sunday’s game might have been an extreme example — New York and Cleveland’s 13 combined travels is the most for an NBA game this season and the most since March 2007, according to ESPN Stats & Information research — the league has seen a dramatic increase in both traveling and carrying violations in recent weeks.

What has been even more dramatic is the increase in carrying and palming calls. In October, not a single carry was called. In November, there were 44 — 43 were called across the entire 2021-22 season. Six palming violations in October were followed by 57 being called in November — 67 such calls were made across all of last season.

The violations have played a part in the leaguewide offensive rating going from 112 points per 100 possessions in October to 111.3 in November, as opposed to offense typically increasing over the course of the season.

And calls have been immune to situation, score and stardom. Shortly after Thibodeau received the technical Sunday, Cavaliers guard Donovan Mitchell was called for a travel a few feet away from the Knicks bench. Golden State Warriors star Stephen Curry was called for a travel on a potential winning 3-point attempt in the final seconds against Dallas on Tuesday.

“If we’re going to call that now,” Warriors coach Steve Kerr said after that 116-113 loss to the Mavericks, “we’ve got to call that all the time.”

Despite frustrations aired across the league, the NBA is trying to do exactly that.

Each preseason, the league releases points of emphasis — made available not only to the referees, but to the teams and media — outlining a new focus in rules enforcement. In recent years, the target has been opening up the game to be played in a more free-flowing fashion. First was an emphasis on freedom of movement, cutting down on defenders clutching and grabbing on the perimeter. Then came eliminating “non-basketball moves” that players such as Philadelphia 76ers star James Harden had honed into a science to draw fouls.

For Monty McCutchen, the NBA’s senior vice president of referee development and training, tackling traveling is the next step in an ongoing quest to change how NBA basketball is officiated.

“We take direction from our stakeholders,” McCutchen says. “I think that [offensive players’] footwork had gotten to where the stakeholders had realized … when you have a game that’s played in space with highly skilled people and then you turn around on top of that and give them the advantage of extra footwork, it’s virtually impossible to guard people.”

McCutchen says the free-flowing nature and spacing of the modern NBA has provided an opportunity for referees to focus on players shifting their pivot foot when attacking defenses, adding that the league has studied data that shows missing such calls leads to additional defensive fouls because it creates an advantage for offensive players to exploit.

“Our concentration was on defensive players because that’s where most of the problems came from. We had to grow and evolve with the game,” McCutchen says.

“We’ve been harping on it and harping on it [with our referees]: You must then find the legal pivot foot and then you must either see a legal step back or a legal dribble before transitioning your focus to defensive players.

“We’re doing a much better job of this and, thus, you’re seeing an increase in violations.”

Curry, for his part, echoed Thibodeau and Bickerstaff: As long as the game is being officiated consistently, everyone will adjust from there.

“All the ones they did call were clear travels. Not much to argue about,” Curry said after the Warriors’ win over the Rockets on Saturday. “Make the adjustments based on how the game is called, and we are talented enough to do that.

“Again, it’s just making sure it’s consistent on both sides, game after game.”

While the emphasis on traveling hasn’t come as a shock, both the number of carrying and palming violations — neither of which were specifically spelled out as points of emphasis heading into the season — have soared.

What has led to the sudden increase? McCutchen says the answer is simple: After watching the opening weeks of the season and studying how officials were reacting to the point of emphasis on traveling, not enough attention was paid to both carrying and palming the ball — acts he says are part of the same sequence of events stressed to referees in the preseason.

“My job as the head coach — for lack of a better description — of our team, is to make sure that the rule book is being enforced,” McCutchen says. “And when we emphasize traveling and sequencing and it picks up another part of footwork, then it needs to be adjudicated properly.”

When asked if he expected there to be a decrease in calls as the season went along, McCutchen says there could be a natural decrease as players adjust. We have seen that in the past. Per Pelton’s analysis, travels per game have declined after the first 20 team games in 24 of the past 26 seasons, including a dramatic drop in 2019-20 when traveling was last a point of emphasis.

Still, McCutchen says that despite some of the high-profile nature of recent calls, he’s happy with the progress the league has made while acknowledging the referees’ task of keeping up with a league constantly evolving around them.

“We’re always going to be just a little behind. The key is to shorten that distance as much as possible through good training,” McCutchen says of NBA referees.

“You’ve heard me say it a thousand times: A referee’s role is to serve the game, and when we’re told where we need to get better at serving the game, then it’s my job to deliver on that.”

And, after the Knicks had one of their best defensive performances of the season Sunday, Randle had one idea for how they could build on that success.

“Hopefully,” Randle said with a smile, “we can force them into more travels.”