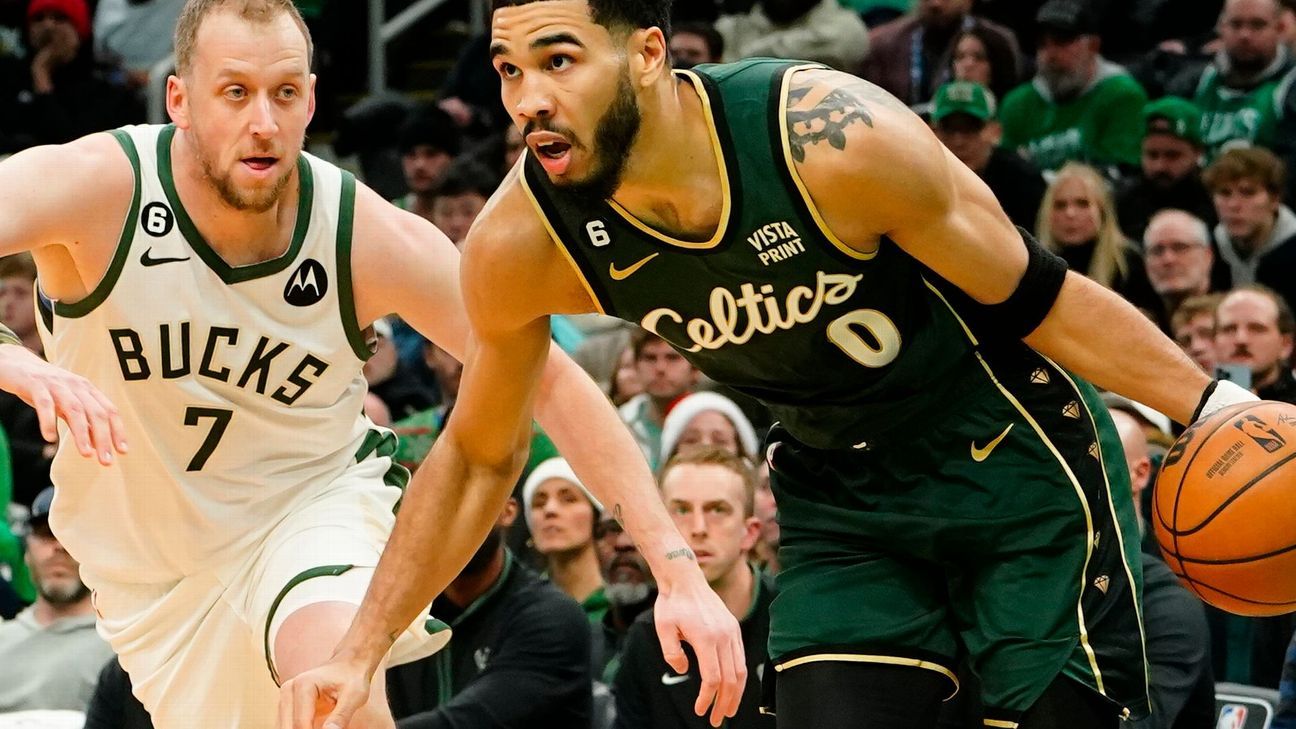 BOSTON — Jayson Tatum scored 41 points, including 20 during the third quarter, to lead the Boston Celtics to a 139-118 victory over the Milwaukee Bucks, turning a marquee Christmas Day matchup featuring the two teams with the best records in the league into a blowout.

Boston held a one-point lead going into halftime before Tatum’s scoring outburst in the third extended the advantage. He stayed on the court for the entire period and shot 7-of-10 from the field, with four rebounds, two assists and no turnovers.

Boston outscored Milwaukee 38-25 in the third to cruise to a victory, and the Celtics’ 139 points were the most by a team on Christmas Day since 1983.

“It’s fun. It’s fun playing on national TV; it’s fun playing on Christmas,” Tatum said. “And those matchups are fun. You get to play against the other best players, and it just raises your level of play. The competition is exciting, but that’s the game that you live for. The moments, the matchups, if you can’t get up for those games, then you’re probably in the wrong profession.”

The contest between the Celtics and Bucks was a rematch of last year’s Christmas Day meeting, during which the Bucks were victorious despite 25-point games from both Tatum and Jaylen Brown. Sunday was also the first time these two teams have squared off since their seven-game postseason series during last year’s Eastern Conference semifinals, in which Boston prevailed with a dominant Game 7 victory at home.

The Celtics advanced in those playoffs with a similar formula they used in Sunday’s triumph.

The Celtics’ defense made things difficult for Bucks star Giannis Antetokounmpo, who finished with 27 points on 9-of-22 shooting. Boston contested 16 of Antetokounmpo’s 22 field goal attempts, including help from six different defenders, and limited his touches in the paint, where he shot just 2-of-8.

“That’s what you need with a guy like that,” Celtics center Al Horford said of Antetokounmpo. “Two-time MVP and just a great player, so we all were matched up with him at some point. That’s one of the strengths of our group, that we have multiple guys that are capable and showed that tonight.”

On the other end of the floor, the Celtics targeted Grayson Allen and Pat Connaughton repeatedly, setting screens to force Milwaukee into switches that usually resulted in one of them being forced to guard Tatum or Brown, who added 29 points on 11-of-19 shooting. Boston shot 9-of-11 with Connaughton and Allen as its primary defenders in the second half, according to research from ESPN Stats & Information.

It helped the Celtics pick up their second straight victory after dropping five of their previous six games.

Tatum’s 41 points represented the highest-scoring total through four games of the NBA’s five-tilt Christmas Day slate. And it was tied for the most by an NBA player on the holiday over the past 10 seasons, according to ESPN Stats & Info data. James Harden landed on 41 in 2018.

It also was the second-most points scored in a Christmas game in Celtics history. Tom Heinsohn scored 45 in 1961.

“It’s definitely an honor. I’ve said many times how much I love being here and what it means to play on Christmas — sixth year in a row and something I never want to take for granted,” Tatum said after the game. “As a kid, that was part of the tradition: Eat, be with family, watch all the games and try to envision myself playing out there one day. Now I get to do that.”