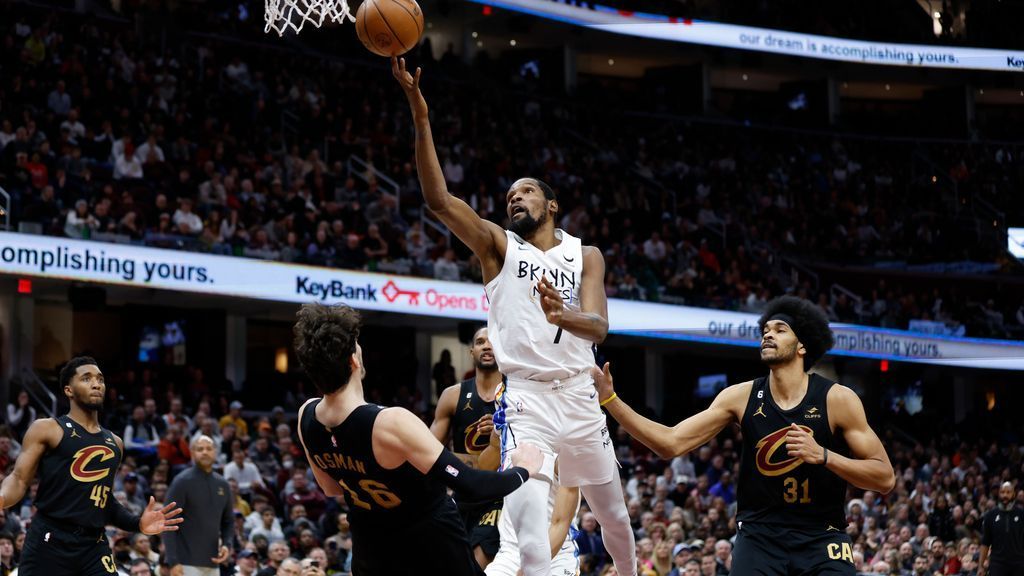 CLEVELAND — Prior to leading his team to its ninth straight win — a 125-117 triumph over the Cleveland Cavaliers on Monday night — Brooklyn Nets coach Jacque Vaughn acknowledged what he thought was the key to his team’s recent hot play.

It was a difference noticeable to many across the league who have watched the talented group go from an up-and-down emotional roller coaster to the hottest team in the NBA — one that tied the league’s longest winning streak after Monday night’s performance.

“From the outside looking in,” Cavs coach J.B. Bickerstaff said before the game, “it appears basketball is the main thing.”

That didn’t appear to always be the case for the Nets. After getting off to a rocky start on the court, Kyrie Irving came under fire after he shared a social media post promoting a movie containing antisemitic ideas and was subsequently suspended for eight games. Steve Nash was out as head coach soon after.

Vaughn says he has helped get the team back on track by keeping things simple.

“I am a simple person,” Vaughn said after Monday’s game. “And really try to keep things simple. And so really stressed what was going to be beneficial for our team. And whether that was the amount of time we spent in shootarounds, the amount of time we shaved [off] and kept our guys fresh, in order to give an extreme amount of effort when we play. And that was kind of the goal, we created a little momentum that way.

“We stripped our playbook down a little bit, we are simple in what we do … have our guys play extremely free of mind. I think there’s something important in that if you’re going to ask your guys to play hard.”

Vaughn took over as interim head coach on Nov. 1 after Nash and the Nets parted ways before becoming the full-time coach a week later. He pointed to a shootaround on Nov. 4 in Washington, D.C., as a turning point for the group’s season. It was there, before a game against the Washington Wizards, and less than a day after Irving’s suspension was finalized, that Vaughn spoke to the group and was “as vulnerable as I could be.”

“I’m going to try and be as consistent as I possibly can with you every day,” he told his team. “And as honest as I can.”

The simplicity in Vaughn’s message, followed up by the MVP-level play from Kevin Durant, is the reason the Nets have completely turned their season around. Their trust on the floor is palpable, they are getting contributions up and down the roster, and they have focused on what has been in front of them. This is the Nets’ longest winning streak since the 2005-06 season, their 13th win in their past 14 games, and they are now 10-1 in December.

Notably, Durant said he felt the Nets’ focus has been where it needed to be all along.

“To be honest, I think we’ve always been about ball,” Durant said after scoring 32 points in Monday’s win. “No disrespect to what you guys do, I just think the outside world, with media and fans, just makes it seem like we don’t care about the game or we are not focused on the task at hand, but I thought we’ve always been that way [about being focused]. It’s a fact that you don’t have much to talk about outside of the game, so that’s not adding to the discussion around our team.”

It’s worth noting that Durant, like many within the organization, has acknowledged frustration about the entire situation in the wake of both Irving’s suspension and his team’s struggles. But those days feel long ago given that the Nets have changed the tenor around their season by going on this winning streak.

“Everybody has a platform,” Durant said. “So there’s so many voices speaking on what we do inside our locker room, when they don’t really have an idea, I think that’s the noise that you hear. But from us we’ve always been about the game. We struggled early on, I’m not saying we didn’t struggle, but we always were focused on playing basketball. I think that other people were trying to look for stuff to put on our team, label our team, whatever. I know the Kyrie stuff may be what you’re talking about, but I feel like we’ve always been about the game, always.”

Durant said that while he had to explain the situation to those close to him, he also praised Vaughn for the way he has simplified things for the group.

“I had so many friends like, ‘Yo, K, are you all right, man?'” Durant said. “‘Man, there’s so much craziness going on with y’all.’ I’m like, ‘Seriously? It’s not really that crazy. Like we don’t talk about this s—, we come in, go to work and go home.’ There’s more noise on the outside, to be honest, and it’s been like that since day one. But what we did was simplify both ends of the basketball.

“And shored up our roles individually, Coach shored up our roles, and pretty much each day what he needed from us, and I think that’s been the focus. So it’s not like, ‘Man, finally we got the noise out of our locker room.’ I just think we’ve always been locked in on basketball and trying to help us get this thing back on track.”

While Durant tried to keep the focus on how solid he believes his team mindset has been, Vaughn admitted that the key has been group’s pushing out all the distractions off the court — which has allowed the Nets to focus on improving on it.

“Without a doubt it’s part of it,” Vaughn said. “And we stressed that, when we came back as a group we kind of pledged to each other that it was going to be about basketball. And hopefully not let anything interfere, any outside noise interfere with that, and our guys have done an unbelievable job of protecting each other and making this thing about basketball.”

For his part, Irving was asked if he agreed with the assessment that the focus was back on the floor.

“For me, personally, I think I just put myself aside at times,” Irving said, after scoring 32 points. “Just trust what we got going on … any external negativity or praise I really don’t care about it. I’m just focused on being the best version of me and letting the results play out based on how well can you trust one another as a group.”