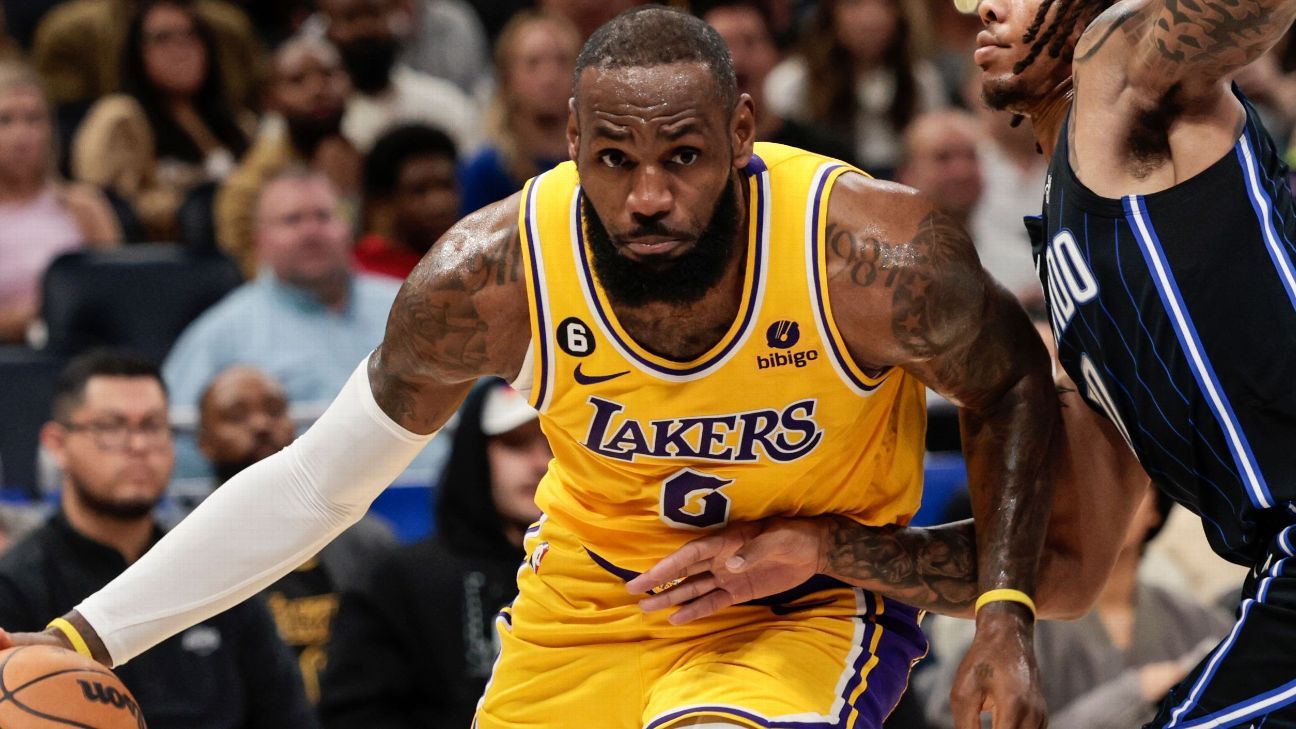 MIAMI — Back in the arena where he played arguably the best basketball of his career, LeBron James was asked to look to the future rather than back into the past and share how much longer he plans to play in the NBA.

“I don’t have a number,” James said Wednesday after the Los Angeles Lakers‘ 112-98 loss to his former team, the Miami Heat, when asked how many more seasons he has left. “I know as long as my mind stays in it, I can play at this level for a minute. Now, that’s up to my mind. My body is going to be OK because if my mind is into it, I will make sure my body is taken care of and I’ll continue to put in the work.”

It was another strong night individually for the 20-year veteran, who led the Lakers in points (27), rebounds (9) and assists (6). But Los Angeles lost for the ninth time in its past 13 games, dropping to 14-21 on the season and placing the Lakers in 13th place out of 15 teams in the Western Conference.

While James said his mental approach will ultimately dictate how much longer beyond the two years, $97 million he has remaining on his contract with the Lakers (with a player option on the second year), that approach is acutely connected to team performance.

Winning, it seems in James’ estimation, is the true fountain of youth.

James’ time with the Lakers has been the most difficult stretch of any of the three franchises he has played for. In Cleveland, he earned Rookie of the Year and two MVPs, made five trips to the NBA Finals and won a championship and the Finals MVP. In Miami, it was two more MVPs, four trips to the Finals, two championships and two Finals MVPs.

As a member of the purple and gold, James did become the first player in league history to win a Finals MVP with three different teams, earning the honor for the Lakers’ win over the Heat in the 2020 Finals in Florida, but he also missed the playoffs twice and experienced the only first-round playoff loss of his career.

Not to mention the Lakers’ struggles this season.

While the subject of James’ longevity naturally came up with his 38th birthday approaching Friday, his decision to answer the question in the manner he did could have been an attempt to apply pressure on the Lakers’ front office to make a trade to field a more competitive roster.

Ever since Lakers big man Anthony Davis was sidelined by a stress injury in his right foot nearly two weeks ago, James has made subtle comments about Los Angeles’ predicament — whether it was praising the Sacramento Kings‘ roster construction around its stars in Domantas Sabonis and De’Aaron Fox or asking rhetorically after a Christmas Day loss to the Dallas Mavericks, “How many times are you going to try to dig yourselves out [of a losing hole] until it’s too much dirt on you?”

Lakers vice president of basketball operations and general manager Rob Pelinka declared at the team’s annual media day in September that it would be his duty to field a competitive team around James.

“Let me be abundantly clear: We have one of the great players in LeBron James to ever play the game, and he committed to us on a long-term contract, a three-year contract. So of course, we will do everything we can, picks included, to make deals to give us a chance to help LeBron get to the end,” Pelinka said. “He committed to our organization. That’s got to be a bilateral commitment, and it’s there.”

James has reinvented the notion of how long a player’s NBA prime is supposed to last. This season, two decades into his career, his 27.8 points per game ranks ninth in the league, and his 35.8 minutes per game ranks 19th.

“He’s a fierce, fierce competitor,” Lakers coach Darvin Ham said after the loss in Miami. “The team, we’re having our ups and downs right now. We’re on the wrong side of the win-loss column. So he’s not going to allow himself to be taken out of the mix. He does as great of a job as I’ve seen ever of making himself available and being able to produce physically at an extremely high level.”

In a recent interview with German journalist Maximillian Haupt, James’ teammate, Dennis Schroder, speaking in his native language, said the Lakers star told him that he hoped to play seven more years, until he is 45.

That number might not have been plucked out of thin air. James has long admired Tampa Bay Buccaneers quarterback Tom Brady, who is still playing in the NFL at 45 and won his record seventh Super Bowl at 43.

Schroder told ESPN he hoped James reaches that goal because “the NBA needs him” and because how special it will be for James to potentially have the opportunity to play in the league with one, or both, of his sons.

James, with a wistful tone, said he has many things weighing on his mind as he readies to blow out the candles on his birthday cake.

“I think about how much longer I’m going to play the game,” James said. “I think about that I don’t want to finish my career playing at this level from a team aspect. I’ll still be able to compete for championships because I know what I can still bring to any ballclub with the right pieces.

“I think about my son graduating high school soon, going off to college, and I’m still playing. My youngest son will be a junior next year — how much more time I’ll miss. So throughout the course of a day, to the weeks, to the months, I think about a little bit of everything, you know?”