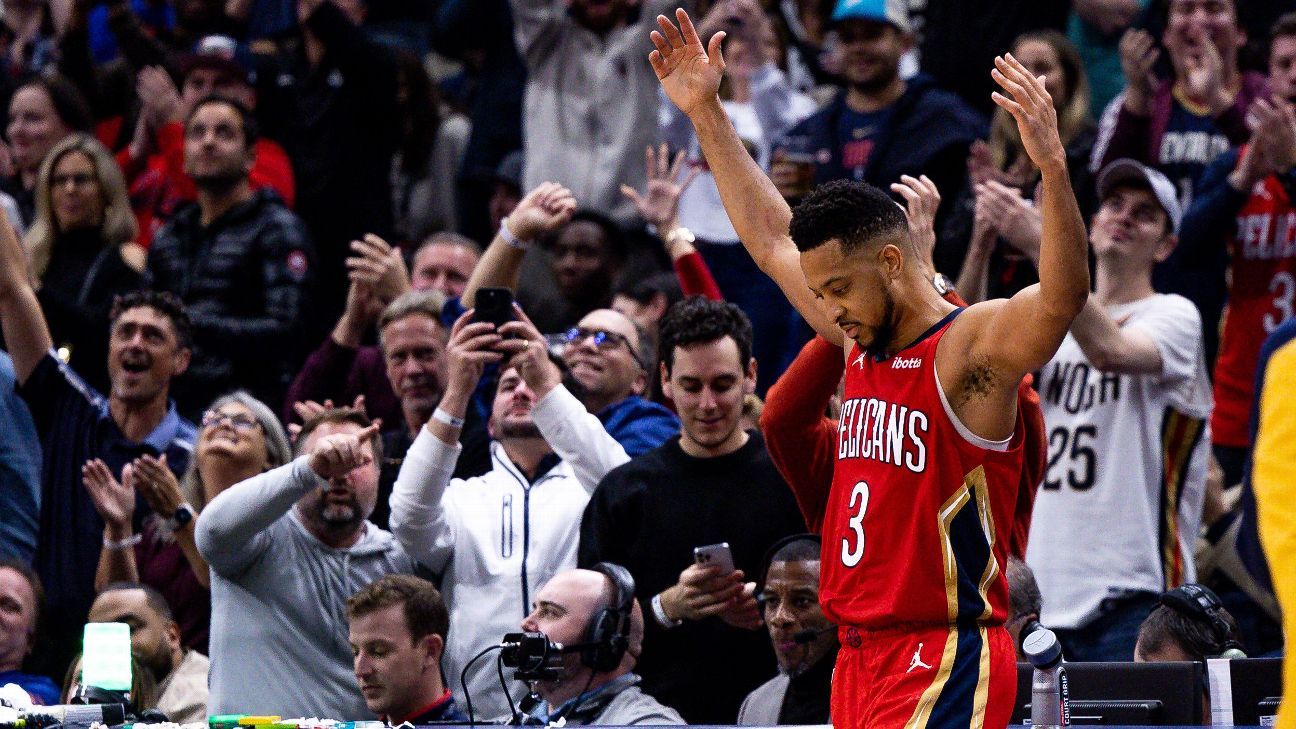 NEW ORLEANS — With 1:48 left in the fourth quarter of Friday night’s game against the Philadelphia 76ers, the New Orleans Pelicans showed a graphic on the big screen acknowledging CJ McCollum’s big night.

McCollum had a season-high 42 points to go along with a franchise-record 11 3-pointers, and while he was waiting for the game to start back up, he glanced up and noticed himself on the screen.

He smiled, folded his hands together and took a quick bow. Then he implored the sold-out Smoothie King Center crowd to cheer as the Pelicans finished off the Sixers in a 127-116 victory.

McCollum’s 3-point record broke the old mark that Peja Stojakovic set Nov. 6, 2007, when he had 10 3-pointers for the then-New Orleans Hornets in a win against the Los Angeles Lakers. It was also the first time in McCollum’s career he hit double-digit 3s in a game. His previous high was nine.

The record-breaking 3-pointer came with 2:30 left in the fourth quarter after a steal on a Joel Embiid pass. McCollum dribbled up the court and took a transition shot on the left wing for 3-pointer No. 11. McCollum said he saw Embiid heading to the basket and decided he was better off letting the shot fly from deep.

He said he knew he was at 10 3-pointers before that shot but wasn’t aware he was nearing the franchise record.

“I was just trying to shoot as many 3s as possible, to be honest with you,” McCollum said.

It was the second consecutive 40-point game for a Pelicans player after Zion Williamson set a career high with 43 points Wednesday night. Williamson turned in another big night Friday with 36 points on 13-of-19 shooting.

McCollum and Williamson became just the sixth pair of teammates in Pelicans’ franchise history to have 35 points in the same game (regular season and postseason). The last time was April 21, 2018, when Anthony Davis and Jrue Holiday hit that mark in the playoffs against the Portland Trail Blazers.

Williamson said that he didn’t realize McCollum had hit 11 3-pointers. But that was because of how McCollum was getting his shots.

“None of the 3s looked forced,” Williamson said. “I think that’s what made it look so beautiful. None of his shots looked forced. They were all in rhythm and all within the offense.”

It was also the third time in Williamson’s career that he has scored 35 points or more while shooting 65% in consecutive games, according to ESPN Stats and Information research. That has been done only one other time in Pelicans history (Davis).

The duo’s big night helped overcome big nights from Embiid and James Harden. Embiid had 37 points for his fourth consecutive 35-point game, tied for the longest streak of his career. Harden had 20 points and 10 assists, becoming the second player in franchise history with at least 20 points and 10 assists in four consecutive games, joining Wilt Chamberlain, who had a five-game streak in 1968.

Philadelphia did get back guard Tyrese Maxey, who had been out since Nov. 18 with a foot fracture. Maxey came off the bench and played just under 19 minutes, finishing with nine points on 4-of-10 shooting.