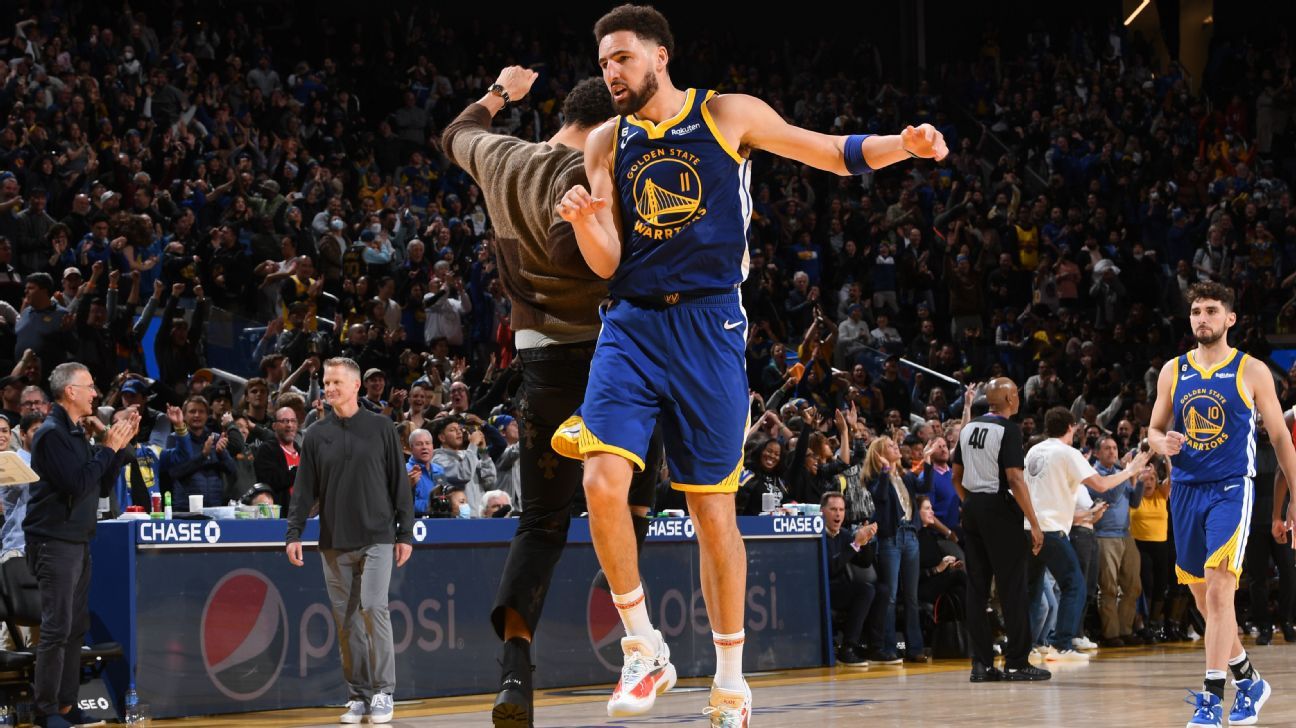 SAN FRANCISCO — Before the Golden State Warriors tipped off against the Atlanta Hawks on Monday night, Klay Thompson had a conversation with Dominique Wilkins. They discussed how Wilkins’ return from an Achilles tendon tear decades ago has made him an inspiration to Thompson, as the Warriors guard has been on a similar journey.

Thompson has spent the early portion of the season searching for the 2019 version of himself, before he tore an ACL in Game 6 of the NBA Finals, only to suffer an Achilles injury right before the start of the 2020-21 season.

“It’s a huge accomplishment for me,” Thompson said. “There were some hard days for me when I didn’t know that this would be possible in real time. I am just going to embrace the heck out of it.”

His 54 points Monday night were the most since his career-best scoring outing of 60 accomplished in three quarters on Dec. 5, 2016, against the Indiana Pacers. It was Thompson’s fourth career 50-point game and seventh with at least 10 3s.

“He just made shot after shot and play after play. He was incredible,” Golden State coach Steve Kerr said.

As Thompson has navigated streaks of poor shooting performances, the bottom line the Warriors have emphasized to him is not to force his game and to play within the flow of the offense.

Teammate Draymond Green told him, “You don’t have to be the same Klay that you once were before. When you understand that and you buy into that, then you become the Klay you were before.”

“When you’re as competitive as he is, when you’re as good as he is, it’s tough sometimes,” Green said. “For two years, everybody is doubting you. That same fire toward that doubt is what made you Klay Thompson … you don’t just lose that. That is embedded in you. It’s good to see him settle down. He’s not chasing it anymore, and it’s falling right in his lap. When you are that good, that’s usually what happens.”

Thompson said he feels more relaxed than he was at the start of the season. In late October, his eagerness to be back on the court and to prove naysayers wrong was a disservice to him, he said.

Now, he is playing with a different message in his head: “I have to remind myself daily that [playing for the Warriors] is literally the dream. What matters most is having fun and playing hard. All the numbers, all the big nights will come as long as I do those two things.”

Thompson has been giving himself those pep talks for a while now. And with the Warriors’ roster depleted — including missing Stephen Curry and Andrew Wiggins indefinitely — it’s even more important for Thompson to listen to himself.

The Warriors were with just nine active players against the Hawks. The second unit was composed of a second-year player, a rookie and a pair of two-way players.

Fatigue was evident. Golden State blew a 21-point lead and missed some big chances in both overtime periods.

At any other point this season, the Warriors might well have dropped this game. They lost their only other overtime game, against the Charlotte Hornets in their second road contest of the season. Thompson missed a potential walk-off shot at the Orlando Magic a few days afterward. And the Warriors dropped a heartbreaker at the Utah Jazz in early December. Green went as far as to call his team fragile.

“Since I said that, we’ve built an M.O., which is being gritty,” Green said. “No matter what the situation is, we are a team that is going to keep fighting. I don’t think this team had built an identity all year, and we are starting to build one. It’s coming at a great time.”

Against the Hawks, Golden State guard Donte DiVincenzo corralled a crucial offensive rebound then knocked down a tying 3-pointer with 0.6 seconds remaining in regulation to send the game to overtime, after Thompson and Jordan Poole had each missed from long range during the same sequence.

Even with all of the Warriors’ big shots down the stretch — including a 3-pointer by Green — Golden State had an unlikely hero, as Kevon Looney tipped in the winner on his own offensive rebound as the final buzzer sounded in the second overtime after missing moments before.

“The first one, I rushed it really quickly, and I just realized nobody was panicking or celebrating,” Looney said about missing his first attempt. “I knew I had time to go back up.”

Looney had a career-high 20 rebounds (10 offensive) to go with 14 points and five assists.

“Everybody dreams about getting a game winner, so whenever you have a chance … it’s a great moment,” Looney said. “Especially in a double-overtime game where everybody was exhausted.”

Thanks to Looney, the undermanned defending NBA champions ran their season-best winning streak to five games. They also have posted six straight victories at home.

The Warriors had four players log at least 44 minutes on Monday. Thompson played a game-high and season-high 46 minutes.

“My tank is on E,” Thompson said afterward during his on-court interview with NBC Sports Bay Area. “Thank god for Kevon Looney, man.”

Earlier this season, Thompson was on a tight minutes restriction after not being cleared to participate in live-action portions of training camp and sitting out of the preseason games. He still hasn’t been cleared to play in both sides of back-to-back games.

“I would not have been able to do this a few months ago, so this is a huge milestone for me,” Thompson said. “It’s a big confidence booster, individually. We’re almost nearing the halfway point. It feels great to feel like I’m getting better with every game. I know I’ll be more consistent as the season goes on … after 30 games under my belt, I’m feeling wonderful.”