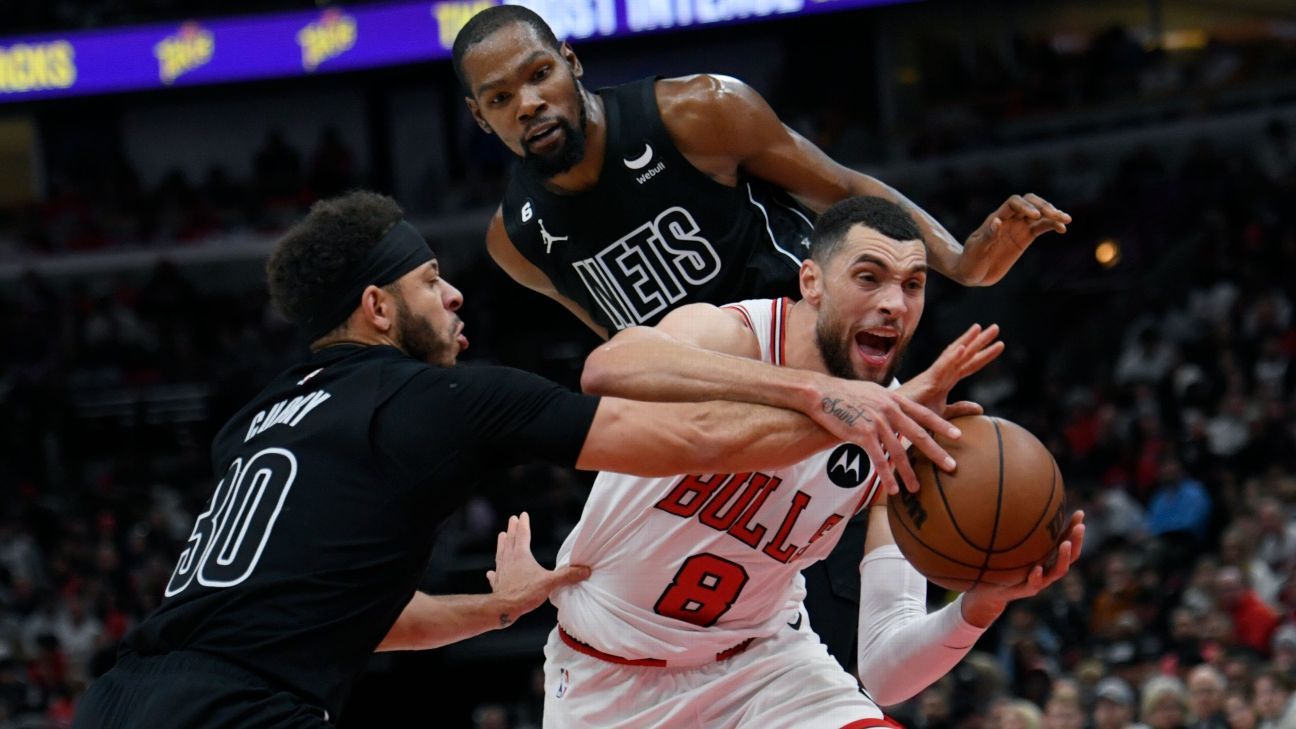 Nets star Kevin Durant scored 44 points on 15-of-22 shooting, but the Bulls halted the longest winning streak in the NBA this season by controlling the game from the start. The Bulls led by as many as 18 points and once they carried a 10-point lead into halftime, they never trailed, bouncing back from a pair of back-to-back losses against the Cavaliers.

“To come out here after those two tough losses and beat one of the hottest teams in the NBA, it’s good,” Bulls guard Zach LaVine said. “I think we came out with the right attention to detail. We withstood their run at the end, and we beat them collectively.”

DeMar DeRozan and Patrick Williams each finished with a team-high 22 points for the Bulls, while Nikola Vucevic and LaVine added 21 points and 13 points, respectively, as the team got contributions across the board on offense.

Durant praised the Bulls’ offense, specifically the “three elite scorers, from all angles of the floor,” in DeRozan, LaVine and Vucevic.

“I felt like a lot of times we chased them a bit, and that was just consistent throughout the whole game, us just playing from behind,” Durant said. “I think we definitely put our foot on the gas in spurts … but they made shots. They’re talented players, special players. When you’ve got your whole five in double figures, it’s tough to stop that.”

Chicago improved to 6-1 against the top three teams in the Eastern Conference — Boston, Brooklyn and Milwaukee — a stark contrast compared to its lackluster 4-8 record against teams under .500.

“Because you know if you don’t come in here and you don’t have your A-game you’re going to get blown out,” LaVine said. “I think that’s the difference in our record. We come out here with the same attention to detail like we’ve all talked about I think that will flip around a lot of things.”

Prior to Wednesday’s loss, Brooklyn’s last loss came on Dec. 4 against the Boston Celtics. In the interim, the Nets won a dozen games in a row, the longest streak in the NBA since the Phoenix Suns rattled off 18 straight wins last year.

But despite losing their first game in about a month, the Nets remained upbeat.

“We understand how we want to play every night,” Durant said. “I feel like the league is always on notice with the talent we have on our team. I don’t think anybody takes us for granted when they’re preparing for us each night. But I think for us we found some things that were good for us on both ends of the floor and want to just be consistent with executing those things as we move forward.”

3 players besides Kevin Durant and Kyrie Irving the Nets could trade to rebuild
‘Amazing’ Giannis posts 5th career 50-point game
How LeBron James’ worst game motivated him to become the greatest
NBA Mock Draft: Who could trade for the No. 1 pick?
NBA Trade Rumors: New player of interest has attention of multiple teams