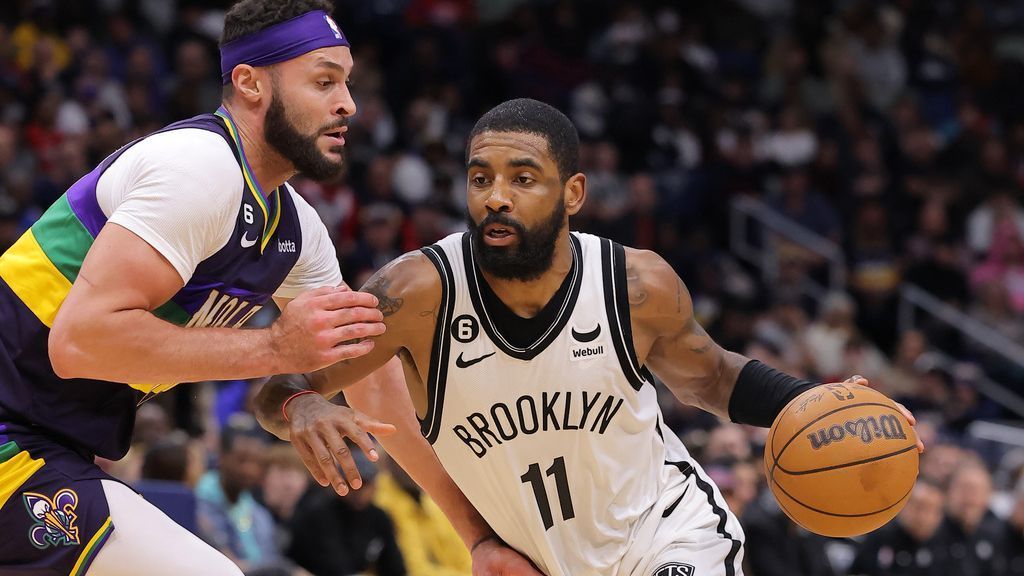 NEW ORLEANS — Despite finishing with a 7-for-22 shooting night, Kyrie Irving couldn’t help but smile as he walked off the floor following a 108-102 win over the Pelicans on Friday at Smoothie King Center.

As has been the case throughout his star-crossed career, the 30-year-old hit the biggest shot of the night: A dagger 3-pointer from 30 feet away with just 43 seconds left, which gave the Nets their 13th win in the last 14 games.

Throughout the last month and a half, the Nets have ridden the hot hands of both Irving and star forward Kevin Durant to overpower teams offensively, but Friday’s win provided a new triumph as the group overcame a poor shooting night in which the dynamic pair finished just 16-for-48 from the field.

In a game that could have gotten away from the Nets, it was a reflective Irving who helped save the day.

“Basketball’s just a very simple artform,” Irving said. “So if I don’t bring all my extra distractions or anything that I’m going through mentally into the game, then I feel like we have a great chance of winning every ballgame.”

The Nets have made winning a habit since new head coach Jacque Vaughn officially took over in early November. The group continues to play with a mental toughness that wasn’t present during the beginning of the season. That edge continues to shine through for Irving since he returned from his eight-game suspension following a social media post promoting a book and movie centered on antisemitic tropes.

“He just has a way of embracing that moment no matter what happened previously,” Vaughn said. “And for Kevin to kick that ball out to him, and Kevin kind of had an iso at the elbow, shows how they’ve grown together. But [Irving] has an unbelievable ability to erase what happened before and be in the moment and take full advantage of that moment and shine.”

Irving said he has worked on his mental approach to the game over the last year — an approach that Durant believes is a key reason why Irving can still come up big no matter how much he may have struggled earlier in the game.

“He approaches it like it’s a minute into the game,” Durant said. “That’s how calm and relaxed he is. Even though the stakes are different at the beginning of the game and the end of the game, I still believe that he’s the same regardless of what the time is on the clock. He plays that way, calm and cool, under control under pressure in the tight moments. It feels like just a walk in the park for him.

“The great ones understand that each possession is important and if you stay even keeled throughout the whole game, you’re usually in solid shape in the fourth.”

So how did Irving hone in on the approach he carries with him now?

“Studying the greats and striving to be greater than them,” Irving said. “You look at some of the great representatives of professional sports across the balance of people, most of the time you see that there’s a similarity, there’s a commonality between the way they control emotions at the end of the game.

The Nets continue finding ways to win games instead of finding ways to lose them, as they did early in the season. They are the hottest team in the league and a group that still believes their best is ahead of them. As they got ready for a flight to Miami in advance of Sunday’s game against the Heat, Irving wasn’t the only member of the team’s traveling party wearing a smile about what they had just accomplished.

“We’ve had a lot of wins so far this season, this one really stands out for me,” Vaughn said. “Just because [we’re in an] opposing arena, down 11, didn’t shoot the ball well, and for us to just stay with it, not lose our poise on the road to believe that we can win. And even going through a stretch where we weren’t making shots to try to defend, to stay together, to stay with the game plan, speaks volumes to the group, how they’ve grown together. So really impressive win, especially on the road after a loss.”