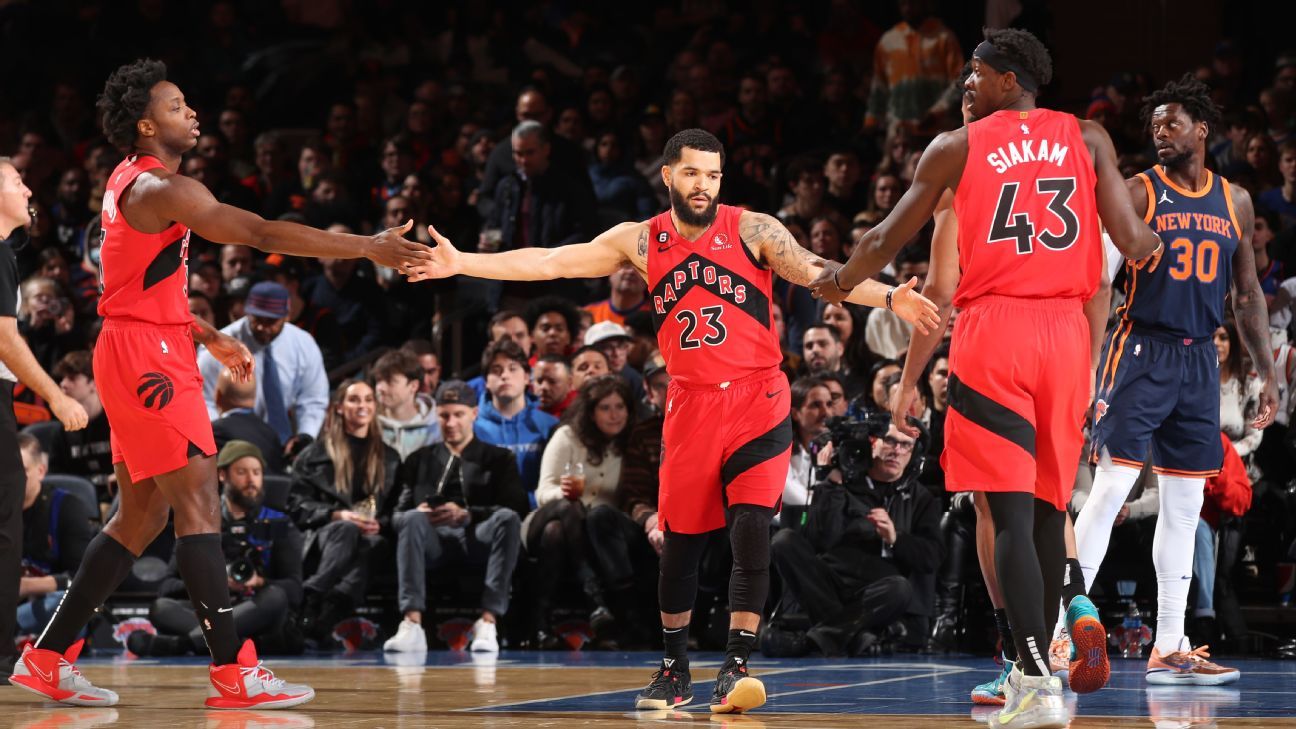 THE TORONTO RAPTORS are a rarity in the modern NBA: a franchise with options.

Plenty of teams have sold off their draft picks to chase contention immediately. Plenty more have moved their stars to pursue futures built around young talent and the NBA draft.

But Toronto is stuck somewhere in between.

The Raptors control all of their first-round picks moving forward. They are considered leaguewide to be an elite organization at every level of management — from ownership (Larry Tanenbaum) to front office (team president Masai Ujiri and general manager Bobby Webster) to coach (Nick Nurse).

They have a roster featuring an All-NBA forward (Pascal Siakam), an All-Star guard (Fred VanVleet), arguably the NBA’s best 3-and-D wing (O.G. Anunoby) and the reigning Rookie of the Year (Scottie Barnes).

And yet, Toronto (17-23) finds itself sitting six games under .500 and having lost 14 of its last 20 games heading into Tuesday’s matchup with the Charlotte Hornets.

“They are a talented team,” an Eastern Conference scout told ESPN, “and yet it just hasn’t worked.”

The nature of today’s NBA leads to teams cycling through rebuilds after four or five years at the top of the sport. That is the result the salary cap, age curves and the draft are designed to produce.

The Raptors have defied the odds in a way few other teams can — they’ve won an Eastern Conference-best 466 games since the start of the 2013-14 season and have reached the playoffs eight out of nine seasons.

But they are finally showing signs of wear.

Not having cap space since the summer of 2015, per ESPN’s Bobby Marks, has prevented the Raptors from adding a significant player via free agency. While Kawhi Leonard, Marc Gasol and Serge Ibaka were all key in Toronto’s 2019 NBA championship run — the first in franchise history — all three leaving with the Raptors receiving nothing in return sapped the team’s depth.

And, after Toronto had one of the great player development runs in recent memory, landing Norman Powell, Siakam, VanVleet and Anunoby all after the 23rd pick in the draft between 2015 and 2017, it’s been unable to recreate that draft magic since.

Combined with a shooting slump that has lasted over a month, Toronto has been put in a position where the rest of the NBA is waiting to see which direction the franchise will take with its underperforming roster.

With exactly one month until the Feb. 9 deadline, what’s happening north of the border has become a massive trade season storyline.

“Their guys are better than whoever else might be available,” an East executive told ESPN. “They’ll have plenty of interest if they’re out there.”

TORONTO ENTERED THIS season projected to finish as a top-six team in the East. The formula was simple: Siakam, VanVleet, Anunoby and Barnes needed to play at a high level to keep up with the heightened competition in the top half of the conference.

And while the Raptors have problem areas — a lack of depth and shooting and defensive woes that have plagued Toronto all season — the heart of the Raptors’ issues are the regressions of both Barnes and VanVleet.

After gliding through a rookie season that saw the 6-foot-8 forward outduel Cleveland Cavaliers big man Evan Mobley for the league’s top rookie honor and showing off a versatile skill set that teams covet in today’s NBA, Barnes has failed to live up to that standard in his sophomore campaign.

“I would say [I’m] still developing,” Barnes told ESPN when asked to assess his second season. “Still trying to find the right places, still working, just finding different ways on how I can impact the game.”

His stats have flatlined or regressed, and he’s been cajoled at times to be more assertive on the court. Consider during last week’s losses to the Milwaukee Bucks and New York Knicks, when Barnes didn’t make a single shot through the first three quarters of either game.

Offensively, Barnes is scoring fewer points (15.3 to 14.9), shooting fewer free throws (2.9 to 2.7) and shooting a lower percentage from the field (49.2 to 44.8). Defensively, per Second Spectrum’s tracking data, opposing players are shooting 49.9% when he is the closest defender this season, compared to 46.5% last season.

“He’s going to have a long career, so this is good for him to struggle a little bit,” VanVleet told ESPN. “We would wish that there wasn’t so much weight on every performance for him, but we do need him to play good in order for us to have success, which is how a team is built. That’s unfortunate in terms of his development, but it’s good for him. … It’s going to make him better, and it’s good for him to go through these struggles.”

“He was pretty much a golden child all last year and then nobody said any bad things about him, and so [he can] get it out the way now,” VanVleet added with a smile. “Let people talk about him, and he’ll be able to bounce back and push through that.”

VanVleet is in the midst of his own share of struggles. Since Kyle Lowry went to Miami prior to last season, VanVleet has assumed his mentor’s role as the heart and soul of the Raptors. He’s the team’s leader, constantly playing through injuries and doing whatever he can to help win games.

VanVleet has also been the face of the team’s shooting slump. Toronto is 29th in the NBA in 3-point percentage since the team’s slide began with a blowout loss in New Orleans on Nov. 30. Up to that point, VanVleet was shooting 37.8% — right in line with his career average of 37.5%.

Since then, he’s shooting 29.2% from beyond the arc on nearly nine attempts per game.

That’s especially been true over the last month. Per Second Spectrum’s tracking data, Toronto has generated the 11th best looks from 3-point range by quantified shot probability (qsP) since Nov. 30. But over that same stretch, the Raptors are dead last in quantified shot-making (qsM), which is the difference between a team’s effective field goal percentage and its qsP, over that same period, hitting 6.2% below what they are expected to on 3-pointers.

For a team that struggles in a variety of metrics in half-court offense, combining that with open looks is a recipe for disaster, which is why Toronto has ranked 22nd in offensive rating over that span.

Even after a couple of improved performances over the last week, the Raptors sit 18th in the league in defense rating since Nov. 30, in large part because of porous transition defense.

Through Nov. 29, Toronto ranked second in transition defense, per Cleaning The Glass. Since then? The Raptors have been 25th — a fatal flaw for a roster already lacking in traditional size, thanks to Toronto’s preference to build out a team full of long-limbed, interchangeable wings instead.

“I think the shots not going in are affecting our transition defense, and it’s affecting our energy and fight a little bit,” Nurse told ESPN.

Add it all up, and a franchise that has grown accustomed to winning has been left wondering what direction it is headed.

THE ARRIVAL OF the play-in tournament has altered the NBA trade landscape.

With 10 teams from each conference now guaranteed, at minimum, the chance to win two games and make the playoffs, it’s both given more teams the opportunity to wait for standings to shake out and has decreased the pool of selling teams.

So while scouts and executives pointed at teams like the Atlanta Hawks, Chicago Bulls and Washington Wizards joining Toronto as potential active teams ahead of next month’s trade deadline, there’s less urgency for middling teams to make moves.

“It makes team less inclined to throw in the towel,” another East executive told ESPN.

That is certainly how the Raptors view things, as they’ve insisted they’ll take until the end of the month, at least, to decide where they are headed.

And, as they evaluate their situation, a few factors will play into the choice they ultimately make.

One is the presence of Victor Wembanyama atop this year’s draft boards. The 7-foot-4 French phenom is one of the best prospects in a generation, and Toronto currently sits tied for sixth in the draft lottery standings and just two games ahead of the Orlando Magic in fifth. When combined with the flattened lottery odds, it puts Toronto in a potentially prime position to lean into chasing lottery luck this spring.

Then there’s the pending unrestricted free agency of both VanVleet and Gary Trent Jr. Before the season, sources said Toronto offered VanVleet the full amount it could in an extension off his current contract: four years and $114 million, per ESPN’s Marks.

VanVleet told reporters after Toronto’s win Sunday that both sides agreed to wait, in part because VanVleet has the ability to sign the extension anytime between now and June 30 if he turns down his player option for next season.

But one thing is clear: VanVleet believes he’s worth more than what Toronto can currently give him.

“Without going too far into it … [I’m] just trying to put myself in a good position business-wise, and not take an extension on a deal that was made three or four years ago,” VanVleet told ESPN.

“I felt like I’ve outplayed that contract thus far. So just trying to get myself in a position to put the cards in their hands. They got to make a decision from an organization standpoint. 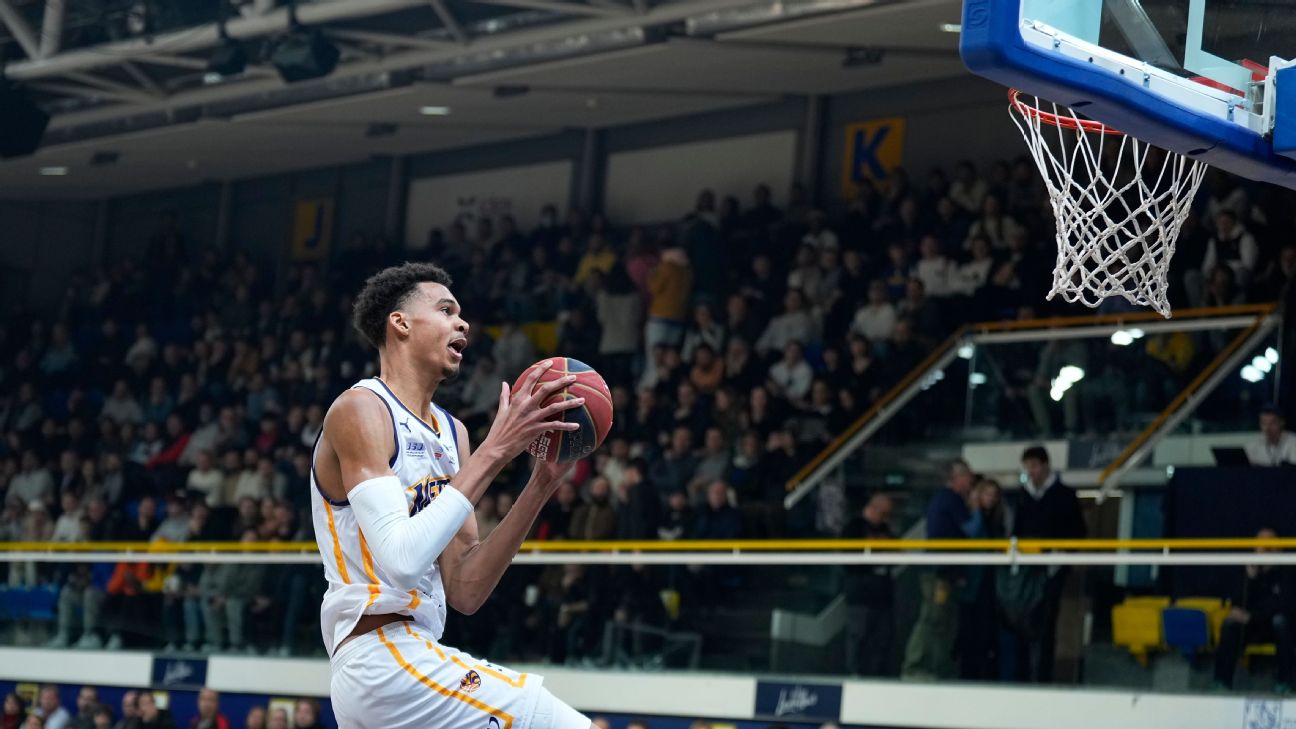 All eyes are on 7-foot-4 French prospect Victor Wembanyama, the 2023 projected top pick. We’ll have complete coverage leading up to the June 22 draft on ESPN.

Trent, meanwhile, can opt out of his contract and become an unrestricted free agent this summer. Two years ago, when faced with a similar situation when Powell was headed to free agency, Toronto flipped him to Portland for Trent, who was going to be a restricted free agent.

The Raptors could choose to go a similar direction with both guards, either getting draft picks or controllable players moving forward. Or, conversely, could hang onto them and have the ability to retain them using their Bird rights this summer.

And virtually every team is watching to see if either Anunoby, a dream addition for any contending team as one of the NBA’s best wing defenders who is a career 37% 3-point shooter, or Siakam, who has evolved into a complete star forward and could be in line for a supermax extension this summer if he earns another All-NBA selection, become available.

The rest of the NBA is waiting to find out, too.