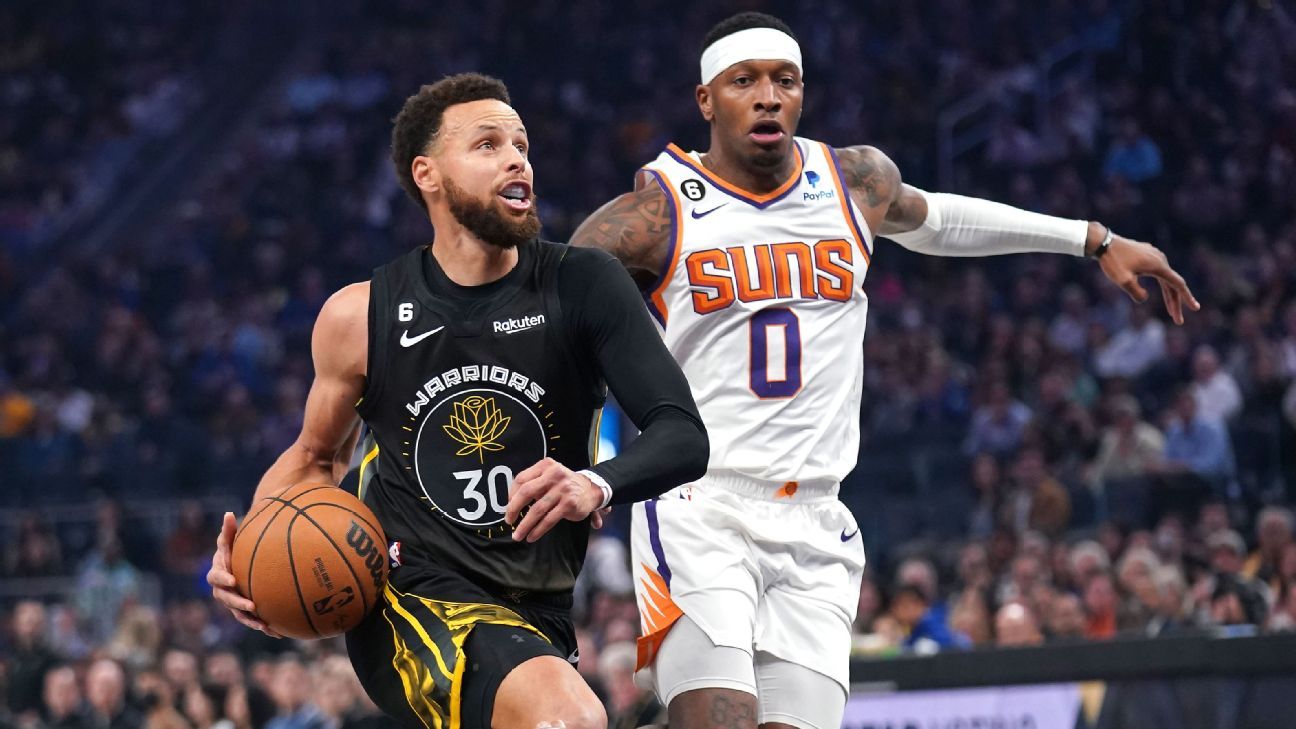 SAN FRANCISCO — Heading into Tuesday night’s game, the Golden State Warriors were confident Stephen Curry‘s return would be the piece they needed to build on the momentum they had established earlier on their homestand without him.

They finally had their best player back. Their starting lineup — the league’s best five-man unit — was whole for the first time since Dec. 3. They were facing an undermanned, struggling Phoenix Suns team.

Instead, the Warriors looked like a similar version of the team they were when Curry went down with a left shoulder subluxation, falling to the Suns 125-113.

“I think with Steph and [Andrew Wiggins] back, we probably relaxed a bit more than we should have,” Klay Thompson said. “We thought with them showing up, we’d just get the dub.”

But both Curry and Wiggins have dust to shake off, and it was evident.

Curry, who missed 11 games over four weeks after being injured on Dec. 14, wore a shooting sleeve on his left arm that stretched from his shoulder down to his wrist. He said that physically he came through the game well and wasn’t thinking about his shoulder during the game — something that was crucial for him to do to be cleared to play.

On Friday, Curry had said he didn’t think his conditioning took too much of a hit during his layoff, and while he played 31 minutes Tuesday night, he admitted playing under a minute restriction affected his ablility to find his rhythm.

Knowing he would play for only certain stretches, there was a level of pressure to regain his form in a finite amount of time, which he tried to balance with playing within the flow of the game.

“It’s hit or miss with how much rust you will have and close you can get to the speed of the game,” Curry said. “The first quarter it felt good just to be out there, running with our guys. … I felt like I got stronger as the game went on. … In the fourth, the intensity of the game picked up. We were playing very desperately trying to come back and make some plays. I felt like myself again.”

Wiggins, who was playing in his second game back from an adductor strain and subsequent injury, finished with 10 points but did so on 5-of-16 shooting and lacked the aggression and rhythm he had before his absence.

Thompson started the night scoring 14 of his 29 points in the first quarter, but then cooled off.

In his first game coming off the bench since Dec. 3, Jordan Poole scored 27 points.

With just over four minutes left in the game, Curry hit three consecutive 3-pointers to breathe life back into the team. Three minutes later, a Poole layup, a stop, a Poole 3 and another stop pulled the Warriors within six after they had trailed by as much as 27.

Out of the timeout, Curry got called for a foul, sending Damion Lee to the line and giving the Suns a three-possession lead. Those free throws wound up being the dagger.

“I’m hoping that fourth quarter was the team that I have come to know and love and recognize,” Warriors coach Steve Kerr said. “But we have to show in the first quarter, not in the fourth quarter.”

The fourth quarter, Curry said, exemplified the “level of focus, of togetherness, toughness, high IQ basketball” the Warriors hold themselves to, and what they know is needed to win.

But, the first three quarters saw the Warriors’ offense disjointed and their defense nearly non-existent. Phoenix closed the first quarter on a 10-0 run and by halftime held a 14-point lead. The Warriors fell behind by as much as 27 points to a Suns team with no Devin Booker, Chris Paul, Deandre Ayton, Cameron Johnson and Cameron Payne.

“I’ve got to do a better job of giving [the Warriors] the slap in the face that Phoenix gave us,” Kerr said. “One team has the edge emotionally like Phoenix did, and they set the tone right away. That’s all it takes.”

Both Kerr and Thompson said this game needs to serve as a reminder to the Warriors that there are no easy games in the NBA, no matter how healthy their roster is or depleted their opponents’ are.

“You need a wake-up call,” Kerr said. “You need to understand the level of commitment to each other, to the game it takes to win a title.”

This isn’t just a reminder to the Warriors’ younger players and two-way players, who Kerr pointed out didn’t play against Phoenix, but to their veterans who have won multiple championships.

“We’ve been talking about it for a long time,” Curry said. “Eventually, you have to do it or else time runs out. … We have 41 games to figure it out. Or else, we won’t.”

NBA Mock Draft: Who could trade for the No. 1 pick?
Donovan Mitchell disagrees with FOX announcers about his NFL potential
Heat vs. Knicks prediction and odds for Thursday, February 2 (Fade Knicks at home)
Anthony Davis snubbed from NBA All-Star Game and Lakers fans are in their feelings
Everything LeBron James and Lakers said about controversial loss in Boston