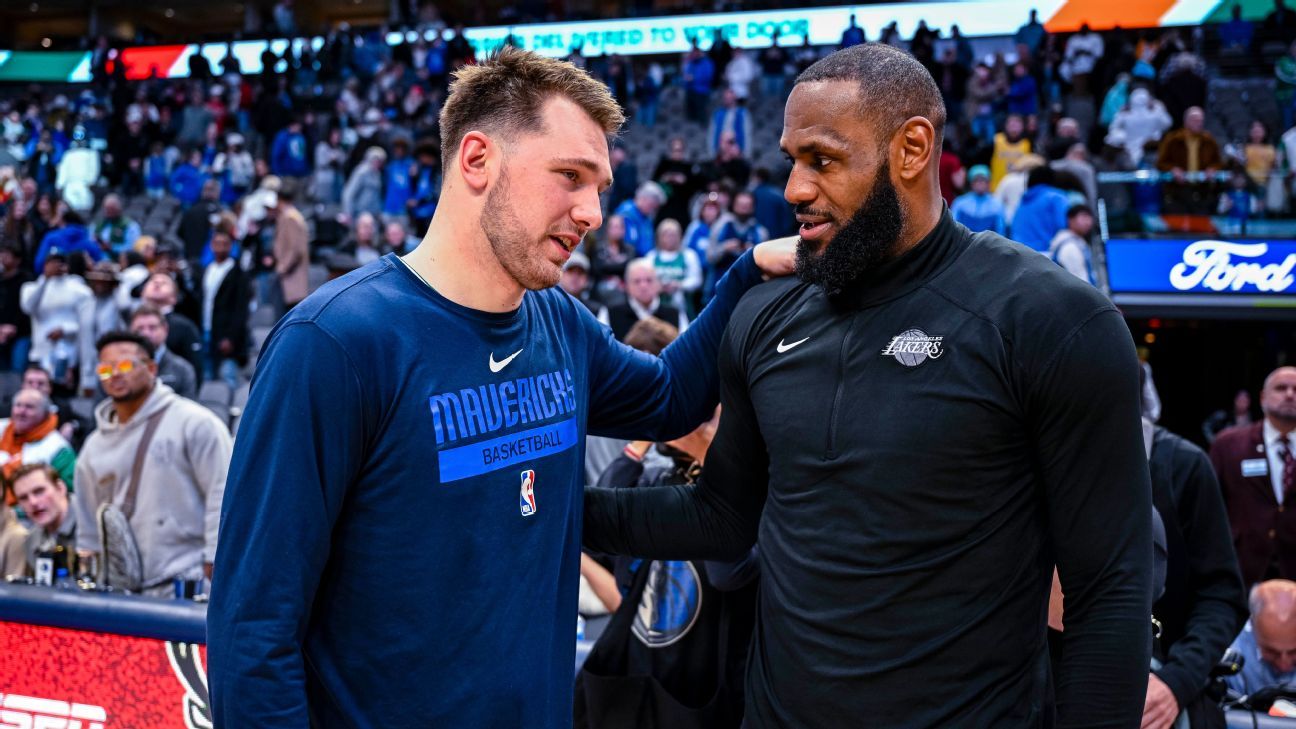 LEBRON JAMES HAS shown no signs of slowing down as he rapidly approaches the NBA’s all-time scoring record long held by Kareem Abdul-Jabbar.

It seems like a safe bet that James, who recently celebrated his 38th birthday, will become the first player to break the 40,000-point barrier. He’s averaging 29.1 points per game for the Los Angeles Lakers, which puts 39,000 points well within his reach. And James has repeatedly mentioned how much he looks forward to sharing an NBA court, and ideally locker room, with his son, Bronny, which means he intends to play at least two more seasons.

Which leads to the question: How likely is it that James’ eventual spot at the top of the all-time scoring list will ever be challenged?

Doncic, whose Mavericks are in L.A. to play the Lakers on Thursday night (10 p.m. ET on TNT), marveled at how well James has maintained his body during his 20-year career, noting how difficult that is to do. Doncic has yet to display that level of extraordinary discipline around the calendar.

There are few players, however, who have been more prolific than the 23-year-old Doncic at that age. He recently became the sixth-youngest player to hit the 8,000-point milestone, a list led by LeBron. And Doncic is piling up points, leading the league in scoring with 34.0 points per game, which is more than James ever averaged in a season.

So if anybody can eventually catch King James…

“If you’re saying me, there’s no way,” Doncic said before the question was even asked, “because I’m not playing that much.”

It’s the second time recently that Doncic has made it clear that he doesn’t envision matching the longevity of some of the legends that have come before him.

Dirk Nowitzki, a couple hours after the statue honoring him outside Dallas’ American Airlines Center was unveiled on Christmas, was asked whether he thought anyone would ever break his NBA record of playing 21 seasons for one franchise.

“Well, we hope Luka can break it,” Nowitzki said after a little chuckle. “That would be cool.”

Doncic shook his head when informed of Nowitzki’s comment.

“I don’t know about 20 years,” Doncic said after a 32-point, nine-rebound, nine-assist performance in a home win over James’ Lakers that afternoon. “That’s a long time to play basketball. I’d rather go back to my farm in Slovenia.”

JAMES HAS INSISTED he never intended to aim for what is arguably the NBA’s most hallowed record.

“The scoring record was never, ever even thought of in my head because I’ve always been a pass-first guy,” James told ESPN’s Dave McMenamin. “I’ve always loved the excitement of seeing the success of my teammates.”

It was Doncic’s passing ability, much more than his prolific scoring, that first inspired comparisons to James. There have been few playmakers in NBA history who have the mind to manipulate defenses, the vision to see the whole floor a few seconds ahead and the size that opens passing windows not available to most point guards.

“Quote me right where I say this — it’s LeBron James-like from the standpoint of how he’s able to rope that pass to shooters in corners, getting blitzed,” Miami Heat legend Dwyane Wade said after the first time he faced Doncic, comparing a then-rookie teenager to his four-time MVP former teammate.

“There’s not many guys who can do that and put it right there. He does an amazing job of it.”

James, who won the 2019-20 assists title, has certainly built a case as one of the best passers to ever play the game. He passed Magic Johnson to move to No. 6 on the all-time assists list earlier this season. He is on pace to move up two more spots, past Mark Jackson and Steve Nash, by the All-Star break.

Catching John Stockton, who has 15,806 career assists, is out of the question. But the No. 2 spot, held by Mavericks coach Jason Kidd with 12,091, is within James’ reach if he extends his career into his 40s.

LeBron James is on track to pass Kareem Abdul-Jabbar as the NBA’s all-time leader in regular-season points this season. We’ll have complete coverage all year long.

Doncic ranks among the league’s top five in assists for the fourth consecutive season. He has averaged 8.1 assists per game in his career, a bit better than James’ 7.3.

But it’d be a stretch to label either of them as facilitators, considering that James has 14 career 50-plus-point performances and Doncic already has four, including three since Christmas.

“I’ve always thought they set the table by passing and that leads to their ability to score,” Kidd, who played with James on the 2008 Olympics gold medal squad and coached him as an assistant with the Lakers for two seasons, told ESPN.

“They have the feel of the game, understanding when they have to take over scoring. They have that luxury to do that in the post or on the perimeter. When you look at those two, [they are] very similar.”

AFTER THEIR FIRST meeting on Halloween night in 2018, rookie Doncic waited outside the Lakers’ home locker room to request an autographed jersey from James, the NBA player he idolized most while growing up in Slovenia and Spain.

They are peers now, two of the biggest names in the game, but Doncic’s admiration for James remains strong.

In fact, this kind of production from an NBA player so deep into a career had never been done.

In other words, nobody in the NBA has ever fought Father Time like James.

That’s especially remarkable considering that James, the No. 1 overall pick in the 2003 draft straight out of high school, is the youngest player to hit every thousand-point milestone up to 37,000, according to ESPN Stats & Information research. And he’s 35 points from becoming the youngest to score 38,000 points entering Thursday’s game against the Mavericks.

That’s a testament not just to James’ talent, but to his fitness and good fortune.

Take the case of Kevin Durant, who ranks behind only James among active scorers and 16th on the all-time list. He won four scoring titles in his first seven seasons and was remarkably durable in that span. But Durant suffered two major injuries during his prime — a broken foot that limited him to 27 games in 2014-15 and a ruptured Achilles tendon that sidelined him for the entire 2019-20 season. Durant, 34, has been sidelined for extended stretches in each of the last three seasons, including now, due to an MCL sprain in his right knee.

James missed a total of only 71 games in his first 15 seasons, leading the league in total minutes three times during that span. He missed only 39 games during his first decade in the NBA.

Doncic has missed 51 games through his 4 1/2 seasons, two of which were shortened by the pandemic, which is why Doncic will likely be about 1,500 points behind James’ pace through his five seasons despite identical scoring averages (27.3 points per game).

To keep doing this — but with better durability — for another decade and a half?

Oof, as Doncic would say.

“You’ve got to hold up your body,” Doncic said of James’ longevity. “You’ve got to play every year — not every game, but a lot of games at the top level, which is really hard. There’s a lot of really, really amazing things that he did.”

Lakers’ LeBron James moves to fourth place on NBA’s all-time assists list
Hold onto your butts: Chris Paul for Kyrie Irving could be coming
NBA Trade Rumors: New player of interest has attention of multiple teams
Rivers, Bamba throw punches; 5 ejected in brawl
NBA Mock Draft: Who could trade for the No. 1 pick?