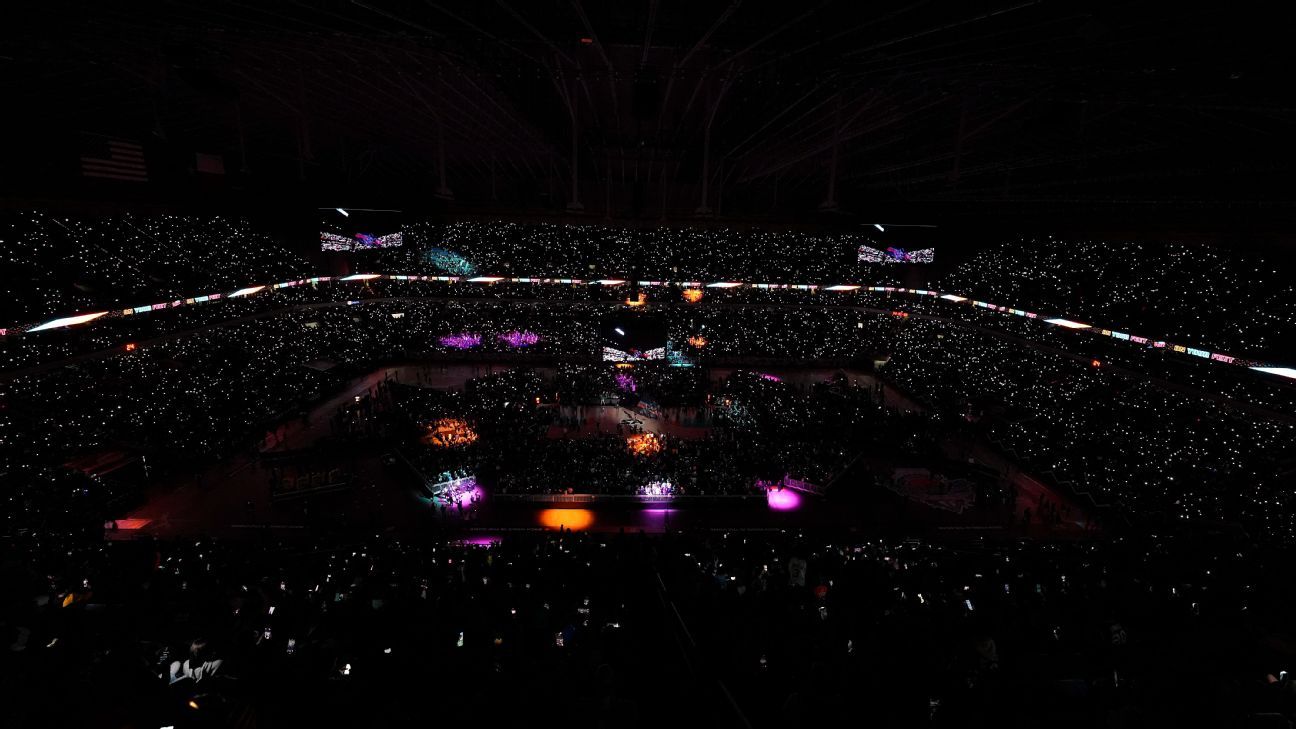 SAN ANTONIO — The Spurs hosted the largest crowd ever for an NBA regular-season game in their return to the Alamodome, with 68,323 on hand for Friday’s game against the Golden State Warriors

The Spurs returned to their former home to celebrate their 50th anniversary season.

Spurs Hall of Famer David Robinson announced the official attendance at the close of the third quarter. Robinson said, “Spurs fans have again set the standard for the league.”

It shattered the previous record of 62,046 who gathered to watch Michael Jordan and the Chicago Bulls play the Atlanta Hawks at the Georgia Dome on March 27, 1998.

“It was awesome,” Warriors star Stephen Curry said of the atmosphere. “… It was cool to see them recognize their 50-year history and all of the great moments that have gone into this organization, the successes and championships they’ve had and the greats that were in the building. It was awesome to experience and it just takes 64,000 to bring our best road performance of the year.”

The Warriors, coming off a loss to the short-handed Suns, bounced back with a 144-113 win to spoil the night for the Spurs. Curry had 15 points in 23 minutes in his second game back from an extended absence due to a shoulder injury.

“Obviously, I hate to lose. But with the turnout, how can you be mad?” Spurs forward Keldon Johnson said. “The Spurs fan base surpassed anything we could imagine. That made tonight special.”

Other Spurs luminaries aside from Robinson were in attendance as Becky Hammon and Tony Parker were seen sitting together courtside while Manu Ginobili was in a suite. Warriors coach Steve Kerr, who won two championships with the Spurs as a player, said he got emotional during a video tribute for him before the game.

“They played the video and introduced me, and to get an ovation from 68,000 fans gives you chills,” Kerr said. “This was a really special night … Feeling the way I did, I know how fortunate I was to be a part of the Spurs.”

San Antonio now plays its home games at the AT&T Center but returned to the Alamodome as part of the franchise’s 50th anniversary celebration.

While the Spurs (13-29) are having one of the worst seasons in franchise history, the chance to play at the Alamodome gave fans a chance to relive a former era for the team.

“The fans enjoyed themselves, even though we were getting our ass kicked,” Spurs coach Gregg Popovich said. “They seemed to be having a hell of a time, so there must have been a lot of beer sales out there.”

The franchise started at the HemisFair Arena in 1973, but the Alamodome is where the franchise took its first steps to becoming one of the most respected NBA franchises.

San Antonio won its first NBA championship in 1999 while playing in the Alamodome and held its championship celebration in the downtown facility.

“Having my son here with me sharing a past and present memory will be cherished by both of us for years,” said Spurs fan Eric Hernandez, who previously attended games at the Alamodome.

“It’s crazy,” said Taro Kotani, a Spurs fan visiting from Japan. “The amount of people here. I’ve never been inside the Dome, so just imagining what it was like here during ’96 All-Star Game and ’99 Finals is so nostalgic. I wasn’t there but this brings back lots of memories.”

Kotani planned his annual trip to San Antonio around Friday’s game because he wanted to be a part of history.

The Associated Press and ESPN’s Kendra Andrews contributed to this story.