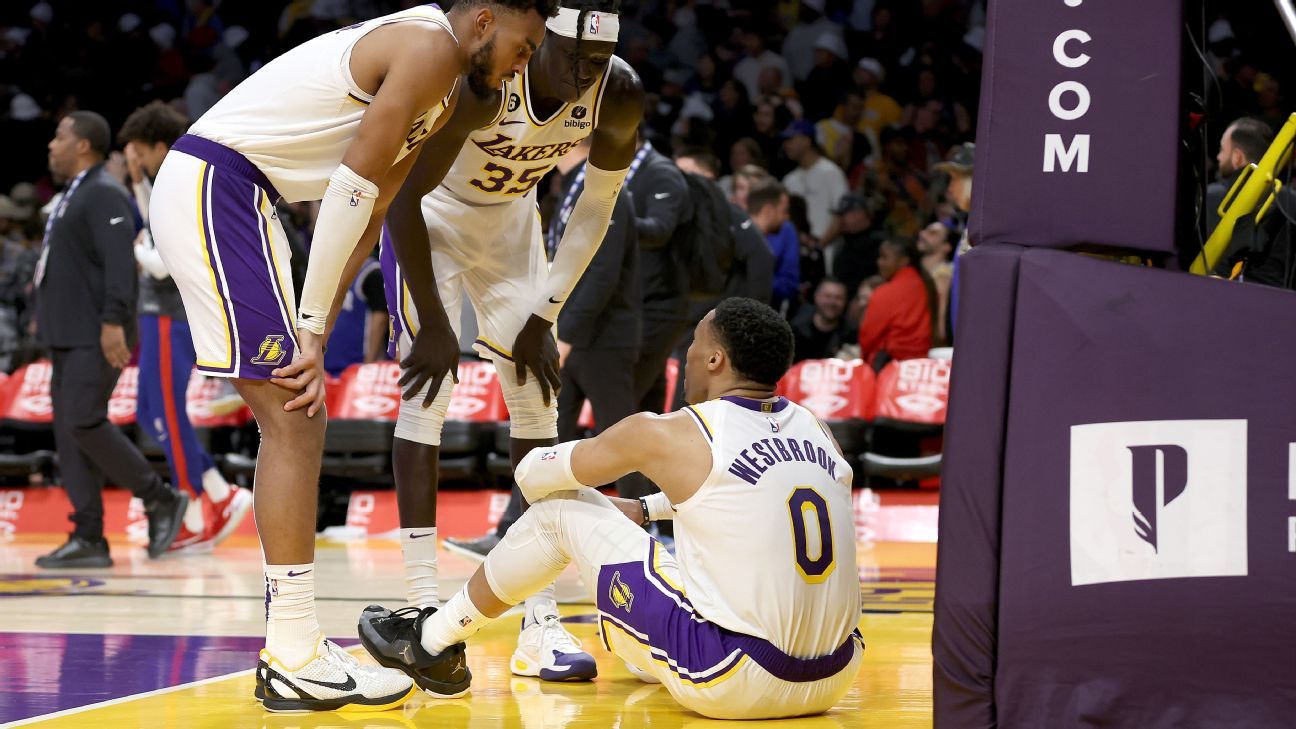 “I was trying to get my hand up,” Westbrook explained afterward. “I couldn’t get my hand up to shoot because [Embiid] was grabbing it. But it’s all good.”

Westbrook showed a small group of reporters a screenshot on his cell phone that appeared to show Embiid’s left hand clutching Westbrook’s right wrist as the 2017 league MVP started his attack dribble toward the basket.

The official box score awarded Sixers forward Georges Niang with a block on Westbrook’s shot attempt with 3.0 seconds remaining and Embiid a defensive rebound with 1.0 seconds left as he corralled the loose ball before the buzzer to close things out.

Embiid disagreed with Westbrook’s take on the sequence.

“I don’t think I fouled him,” Embiid said. “Physical play on both sides. You could have called a foul on the other end, too, on the bump. So, it goes both ways.”

Then, in typical Embiid fashion, the Philadelphia big man gave his version of events with a bit of a wink-wink.

“They were pushing the ball in transition and he was in front of me and I just waved everybody else off. I believe I’m a great defender, so I believe I can get a stop on anybody,” Embiid said. “[Westbrook] was actually unlucky because he lost the ball and then from there, he kind of had nothing else going.

“Yeah, I would say it was unlucky.”

The loss, which was the Lakers’ third straight and came on the heels of a defeat against the Dallas Mavericks in double-overtime Thursday, dropped L.A. to 19-24, 13th in the 15-team Western Conference.

“It’s just frustrating,” LeBron James said. “Getting in those positions and not being able to come out with the victory. … We’re playing good basketball. We’re just not winning games.”

Lakers coach Darvin Ham defended both his decision to not call timeout with 13.1 seconds remaining when Westbrook rebounded an Embiid miss on the defensive end and the fact that Westbrook was the one to orchestrate the final possession instead of James.

“Down one, you’ve got one of our best playmakers to the rim, one of our best finishers at the rim, has the ball with Embiid standing in front of him,” Ham said. “I’ll take that scenario every day of the week and twice on Sunday.

“We just got to finish the play. That’s it. Make a harder, stronger move to the rim. That’s it. It’s as simple as that. And it just didn’t work out.”

Before the game, with Anthony Davis (right foot stress reaction), Patrick Beverley (non-COVID-19 illness), Austin Reaves (left hamstring strain) and Lonnie Walker IV (left knee tendinitis) all out, Ham said that the only two automatic choices for his closing lineup would be James and Westbrook.

Despite the finish mirroring other late-game situations that resulted in losses for the Lakers this season against the Portland Trail Blazers and LA Clippers when the opposing team’s center guarded Westbrook in crunch time and Westbrook failed to capitalize, Ham doubled down on his support of his point guard.

“Just being down one point and the ball is in Russell Westbrook’s hand, I’m comfortable with that. I don’t know how much I can reiterate that. If it was Bron, it’d be the same thing,” Ham said. “It’s disappointing that we lost. And it’s disappointing that we couldn’t close the game out. But make no mistake about it, down one with the ball in Russ’ hands with Embiid standing in front of him, I have confidence in my player. And that’s not going to change. We just got to make a better play.”

The end spoiled an otherwise splendid night for Westbrook individually and the Lakers as a team. Westbrook had 20 points, 14 rebounds and 11 assists, becoming the all-time leader in triple-doubles for a substitute by logging the fourth of his career.

James scored 35 points on 15-for-23 shooting, with 10 assists and eight rebounds, and moved his career scoring total past 38,000 points — becoming the youngest player ever to reach the mark and just the second player ever to do it after Kareem Abdul-Jabbar, the NBA’s all-time scoring leader with 38,387 points.

“We got another one tomorrow and we got to be ready to play against a young, fast, energetic Houston Rockets team.”

NBA Trade Rumors: Surprising new team in the hunt for OG Anunoby
Sources: Suns’ Booker could return for Nets game
Breaking down the NBA’s historic surge of 50-point performances this season
NBA Mock Draft: Who could trade for the No. 1 pick?
Malone, Nuggets staff set to coach Team LeBron